The latest opinion poll in the referendum campaign shows the Yes side still ahead - but with a large number of undecided voters still holding the key to the outcome.

The Millward Brown Lansdowne poll for tomorrow's Irish Independent was carried out on Monday and yesterday, with 1,000 adults across all constituencies questioned.

When the undecided voters are excluded, the Yes side is ahead, by 60% to 40%, still a pretty comfortable margin in favour of the Treaty - but not by any means an insurmountable one.

That result is broadly in line with polls by other companies in recent weeks - and as always, it will all come down to which side can be most persuasive in the closing weeks of the campaign.

Elsewhere, Minister for Finance Michael Noonan said not a country in the 17 country eurozone could carry the fiscal treaty in a referendum bar Ireland.

Mr Noonan said adopting the treaty will send a signal out to Europe that the Irish are serious, committed people, and committed to the repair job required for the economy.

If we vote No, he said, Europe will move on and we will be left with less than full membership of the eurozone.

To laughter from the audience at an economic summit organised by Bloomberg in Dublin this morning, Mr Noonan said he does not want Ireland to be a pavilion member of the eurozone "where you are allowed drink in the bar, but not play the course".

However, Sinn Féin's Pearse Doherty has criticised this morning's remarks by Minister Noonan, saying ordinary people would not recognise the economy he described.

Mr Doherty pointed to emigration, unemployment and mortgage difficulties as the reality for many people.

He challenged Minister Noonan to a public debate on the issues and on the fiscal treaty, which he said would lead to continued austerity for years to come.

Asked about Mr Noonan's pavilion quip, Mr Doherty said the minister was good at sound bites, and it was not long ago that he was talking about the economy "taking off like a rocket".

Meanwhile, UK Independence MEP Nigel Farage said ratification of the fiscal treaty would result in an unacceptable loss of sovereignty for Ireland.

He said the eurozone was in crisis and it would be madness to sign up to something that may not exist in two to three weeks.

Mr Farage was speaking as a delegate of the Europe of Freedom and Democracy group who are in Dublin today campaigning against the fiscal treaty.

Fianna Fáil Finance Spokesman Michael McGrath accused the No campaign of peddling a dangerous message which could result in Ireland having to face a Greek-style uncertainty about the funding of the country.

Mr McGrath said a rejection of the treaty will almost certainly increase the likelihood of Ireland needing a second bailout due to an inevitable spike in borrowing costs. 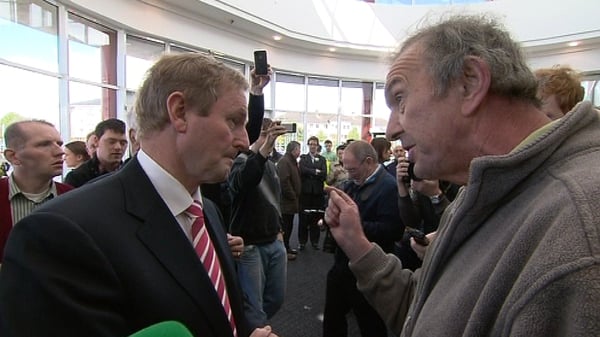