The number of places on the National Internship Scheme is to be increased by 1,000 to 6,000 due to the level of demand.

JobBridge, which was launched a year ago, was set up to provide an opportunity for those out of work to gain further skills.

Over 6,800 internships have been provided in the past ten months, the majority by private sector employers.

The scheme will be extended from 28 May to include those in receipt of One Parent Family Payment and the Disability Allowance.

JobBridge Steering Group chairman Martin Murphy said that of the 2,000 people who have completed the scheme, 797 have gone into full-time employment.

Speaking on RTÉ's Morning Ireland, Mr Murphy said that the success of the programme has led to its expansion.

He said the rate of employment for those completing the programme is in line with similar schemes in Europe.

Mr Murphy added that others who passed through the scheme had gone back to full-time education and a significant number of those who leave the scheme before completion are going into full-time jobs.

Asked about the suggestion that the scheme provided cheap labour for employers, Mr Murphy said 93% of interns surveyed said they would recommend the scheme to a friend.

He said the feedback from both the employer side and the intern side had been positive. 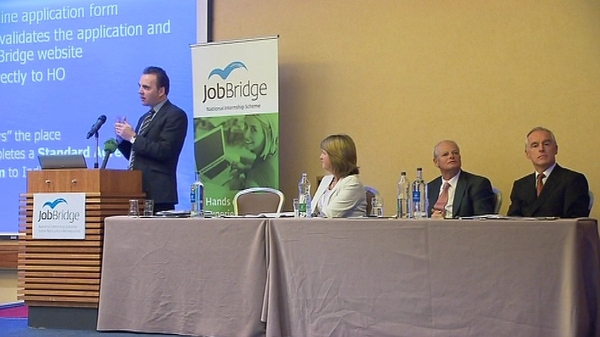 Over 20% of JobBridge internship places filled