Sinn Féin president Gerry Adams today said he is prepared to debate other party leaders on the fiscal treaty.

Responding to a challenge from Fianna Fáil leader Micheál Martin, Mr Adams said: "I would be happy to debate Micheál Martin and all other party leaders on the Austerity Treaty.

“Given the importance of this referendum to Ireland's future there should be a live TV debate with all party leaders, similar to the General Election.

"Obviously the key players in any debate will be the leaders of Fine Gael and Labour as it is the Government who must explain where the €6bn in cuts is going to come from and who must answer questions about the veto."

Earlier, Tánaiste Eamon Gilmore echoed Mr Martin's challenge. He said he would be happy to participate in such a debate.

Earlier, Mr Gilmore had said it is not too early for the Irish people to vote on the fiscal treaty, despite uncertainty in light of elections taking place in France and Greece.

He said there has to be stability for the euro, and that the elections in Europe could turn out to be "very helpful" for Ireland, because the Government believes the treaty needs to be accompanied by a growth strategy in Europe.

Mr Gilmore said the election of new leaders in European countries "who will support such a strategy is something that will be very welcome". 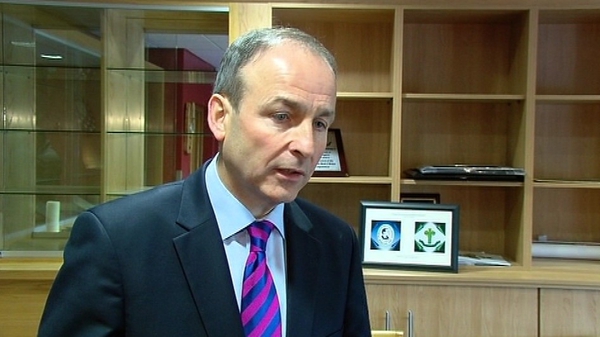