Campaigning has ended in France for a decisive second-round presidential vote.

Francois Hollande is expected to be crowned the country's first Socialist leader in two decades despite polls showing President Nicolas Sarkozy clawing back some ground.

The election tomorrow may prove decisive for the direction of Europe as Mr Hollande has promised he will try to temper a German-led austerity drive across Europe.

Mr Sarkozy, who became the first sitting president of modern times to finish second in a presidential first round vote, must overcome high disapproval rates because of his abrasive style.

If he did win, it would be a political sensation after a whirlwind campaign by the man many voters blame for stubbornly high unemployment, running at a 12-year high of nearly 10%, and France's stagnant economy.

Mr Sarkozy made an impassioned final plea to France's 46 million voters yesterday, saying the election's outcome was balanced on a "razor's edge".

He warned that a Socialist victory could send the eurozone's second largest economy spiralling into rising deficits and debt, like Greece.

Final polls before a mandatory media blackout on campaigning from midnight showed the 57-year-old conservative leader, an aggressive campaigner, cutting Mr Hollande's lead to just four points from around 10 a few weeks ago.

Voting began today in the north Atlantic islands of Saint Pierre and Miquelon, just off the coast of Canada, and was due to begin later in the day in several other French overseas territories.

Polls in mainland France are due to open tomorrow from 8am to 6pm (7am to 5pm Irish time), with voting stations in big cities remaining open two hours longer.

The first official results will be released after the last voting booths close. 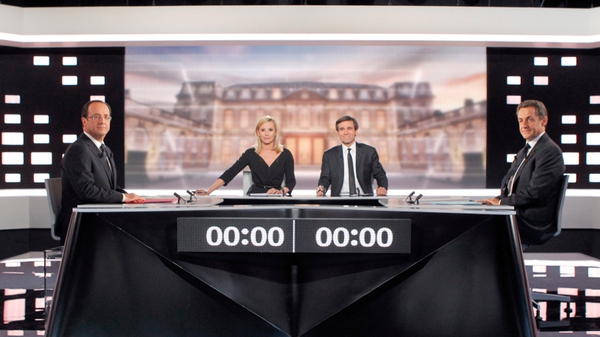