The executive council of the Irish Congress of Trade Unions has decided not to issue any recommendation to union members on how to vote on the fiscal treaty.

Congress General Secretary David Begg said nobody at all in its ranks was supporting the treaty.

However, he voiced fears that rejection would mean exclusion from the European Stability Mechanism, the consequences of which could be very difficult.

ICTU will circulate a "synthesis paper" on the issues surrounding the treaty to individual unions, which can then be used to inform members prior to voting.

However, that synthesis paper would not be marketed by Congress as either a rejection or an endorsement.

The issue was not put to a vote at the executive council.

Mr Begg said the attitude of the Government had not been a factor in its deliberations.

Asked whether there was anything the Government could do to increase the prospect of support for the treaty, Mr Begg said the atmosphere would be a lot easier if consideration was given to SIPTU's proposals for a stimulus package to create jobs.

Already Mandate, Unite and the TEEU have come out against the treaty.

SIPTU has only offered support conditional on a Government stimulus package. Other unions have not yet formulated a position.

Today, SIPTU’s Jack O'Connor said he might abstain from voting for the first time in his life in the upcoming referendum.

The leader of the country's largest trade union repeated his call for a stimulus of over €10bn to be introduced before he would advise his members to vote in favour of the treaty.

He said unless the domestic economy was stimulated, it does not really matter which way people vote.

Mr O'Connor said he could not recommend a No vote, because nobody had come up with a solution to the denial of access to ESM funding if we cannot borrow independently.

Sinn Féin has launched its campaign urging a No vote in the referendum.

Speaking at a press conference in Dublin city centre, Sinn Féin President Gerry Adams said it was a choice between austerity and growth.

He said suggestions that Ireland would be cut off from ESM funding were “complete and absolute rubbish”.

Mr Adams said a No vote would not be a gamble and Ireland would not be cut off from bailout funding. He said it would be the safe thing to do as continued austerity would not work.

The party leader said Sinn Féin was not naive and recognised that the deficit needed to be reduced, but he said it could be done in a safer, more equitable way.

The party has also defended the use of quotations on one of its leaflets from three economists who support the treaty.

Party campaign director Eoin Ó Broin told RTÉ News that it quoted the three as economists giving their opinion on the economics of the treaty and did not claim they opposed it.

Mr Ó Broin said the quotes are accurate and that their support for the treaty was because they believed a No vote would preclude Ireland from accessing bailout funds.

The use of quotes from Colm McCarthy, Karl Whelan and Seamus Coffey was raised in an Oireachtas Committee today by Fine Gael TD Paschal Donohoe.

Mr Donohoe said it was a "black hole" at the centre of the Sinn Féin campaign.

Dr Whelan, a UCD economist, is quoted on the leaflet as saying that "the economics of this treaty are pretty terrible".

On his website, Dr Whelan pointed out that the full quote from his testimony at an Oireachtas Committee was "all that said, although I think the economics of this treaty are pretty terrible, on balance, the arguments favour Ireland's signing up to it".

Earlier, Sinn Féin alleged that the Government website stabilitytreaty.ie was ''skewed'' in favour of a Yes vote.

Responding to the comments, a Government spokesperson said: "The Government is determined to make sure that this is the most comprehensive information campaign in relation to a European referendum discussion to date.

“To that end the Government will ensure that a maximum amount of information is available to voters in advance on 31 May.

“It is strictly an information campaign." 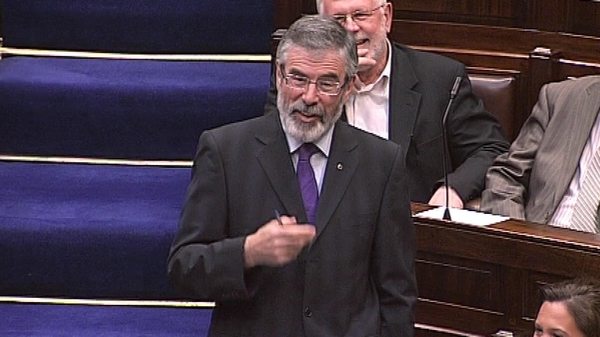