Renewed clashes broke out in Bahrain overnight between hundreds of anti-government protesters and police just a few hours before a Formula One race.

Police fired tear gas and stun grenades at Shia protesters who responded by hurling rocks and fire bombs while chanting "Down with Hamad," in reference to the country's Sunni King, witnesses said.

The race got under way as scheduled at 1pm.

Demonstrators also called for the release of prominent Shia activist Abdulhadi al-Khawaja, who has been on hunger strike since early February and whose deteriorating health has raised fears he may die in prison.

In a message posted on Twitter, Bahrain's interior ministry said that Mr Khawaja was in "good health" and would meet Denmark's ambassador today.

Mr Khawaja is a dual citizen of Bahrain and Denmark.

Security around Bahrain's Shia villages was heavy late Saturday, in anticipation of demonstrations called for by the 14 February Youth Movement, who have boycotted the race and pledged "three days of rage" to coincide with the Grand Prix event.

The Sakhir circuit was under a total lockdown, but witnesses said protesters were briefly able to block some roads leading to the track, setting tyres and garbage on fire.

In some Shia villages, including Malkiya, Karzakan, Sadad and Damistan, protesters carried banners that read "No to the formula of blood," a key campaign slogan of the 14 February movement.

The latest clashes come a day after a protester was found dead in the Shia village of Shakhura, where the opposition Al-Wefaq movement said security forces on Friday night "attacked peaceful protesters, brutally beating some of them with various tools and weapons."

The interior ministry said an investigation was under way into the death of 36-year-old Salah Abbas Habib, which was being treated as a murder.

Shia-led protests have intensified in Bahrain, site of a deadly month-long uprising that was crushed last year, but the kingdom's rulers have insisted the race go ahead as schedule. 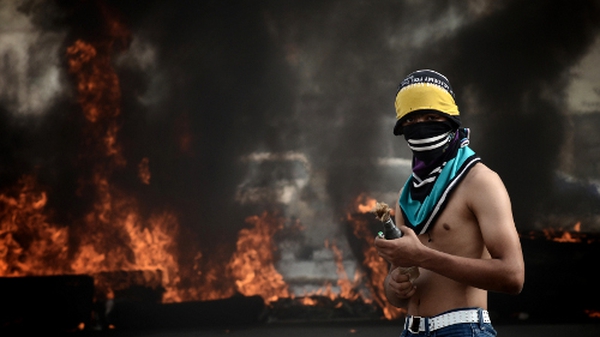