Activists have promised to mark the Bahrain Grand Prix, which began today, with "days of rage" after more than a year of Arab Spring protests.

On the eve of the first practice session, protests flared in villages surrounding the capital, far from the circuit where the race will be held.

Police fired tear gas and stun grenades to disperse demonstrators in clashes that have been building in the week leading to Sunday's round of the F1 World Championship.

The government hopes to use the Grand Prix as a way of showing that life is back to normal after a democracy movement launched an Arab Spring-inspired uprising last year.

The protests were initially crushed, but were not stamped out and demonstrations and clashes are frequent.

Two Force India staff, one a data engineer and the other a contractor, left Bahrain yesterday to return to Britain after a car that one of them was travelling in was stopped on the highway by a flaming petrol bomb.

While sports correspondents poured into Bahrain this week to cover the race, non-sports reporters from Reuters and some other news organisations have not been granted visas to visit the Gulf island.

"Formula One in Bahrain has been taken as PR for the ruling elite, the repressive dictators who are ruling the country," activist Nabeel Rajab told a news conference.

Western companies are opting not to entertain clients and partners following calls for sponsors to boycott the event.

Shell, which sponsors the Ferrari team, will not be hosting any guests at the event, a source familiar with the company's plans said.

Unrest forced the cancellation of last year's Grand Prix, and the 2012 race has been in doubt as Bahrain's human rights record has come under fire from abroad.

Red Bull's double world champion Sebastian Vettel played down the trouble. "I haven't seen anyone throwing bombs. I don't think it's that bad. I think it's a lot of hype."

Several hundred demonstrators tried to stage protests in the capital, Manama, yesterday. Police broke up the protesters, who are vowing to intensify their actions over the three-day race meeting.

However, it was not clear if Wefaq, the leading Shia opposition party, would organise large rallies, as this could open it to government accusations of acting against the nation's interest. Wefaq has said it is not against staging the race.

Manama is under tight security, with police stationed on bridges linking the capital to the rest of the country and the Bahrain International Circuit in Sakhir.

Though life in Manama's main commercial, residential and tourist districts appears detached from the nightly battles, tear gas often floats over from conflict zones pocketed around the capital.

The death toll from the year of turmoil has risen to around 70, activists say, with many due to heavy use of tear gas. The government disputes the causes of death and accuses protesters in Shia villages of being saboteurs out to harm the police.

Activists say the government has tightened its security grip over the past week in an effort to keep Shias in their villages and stop them gathering on main highways when the international media glare is on the race.

Rights activists and medics say around 95 protest organisers have been arrested in night raids in the past week and 54 people wounded in clashes. Police have declined to give figures on arrests and injuries.

The Bahraini government must also decide what to do about a jailed Shia rights activist who has been on hunger strike for more than 70 days.

Abdulhadi al-Khawaja is one of 14 men in prison for leading the uprising last year. Releasing him would involve a loss of face for the government, but his death would create a martyr.

"He is a pain in the neck for them, but they don't want him to die also, that's why they have taken him to their best hospital, in the royal wing," his wife Khadija al-Mousawi said in an interview, wiping away tears.

Large sums of money are at stake this weekend. Last year, Bahrain paid a "hosting fee" of $40 million despite cancelling the race. The Grand Prix drew 100,000 visitors to the nation of just 1.3 million and generated half a billion dollars in spending when it was last held two years ago.

A group of British lawmakers warned Formula One sponsors that they risked damaging their brands by supporting the Bahrain Grand Prix and said the race should have been called off.

Andy Slaughter, who heads the All-Party Parliamentary Group for Democracy in Bahrain, has written to several of the blue-chip companies that bankroll the sport.

"The scheduling of the Bahrain Grand Prix will provide a forum and indicate to the rest of the world that it is business as usual - when the reality could not be further from the truth," he wrote. 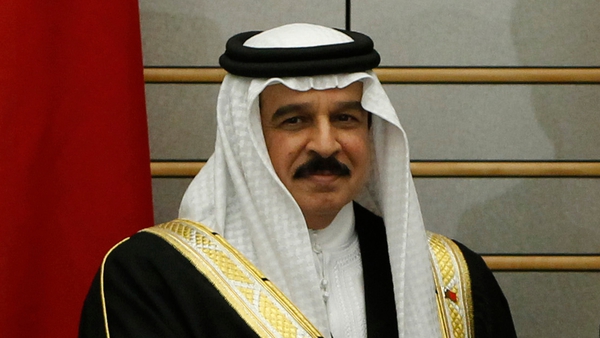