Delegates attending the ASTI's annual conference in Cork have been told that they will be balloted on withdrawing from the Croke Park Agreement, if reports of cuts in allowances for teachers prove true.

ASTI President Brendan Broderick said members did not vote for the deal because it was a good deal for public servants, but because they had no choice. He said if the Government does not honour its side of the agreement, a ballot on industrial action is inevitable.

Commenting on continuing concern about budget cuts in the provision of guidance counselling, Mr Broderick warned the Minister for Education that this will lead to an increase in early school dropout rates and young people getting into trouble with the law.

It costs more to keep a person in jail for a year than to maintain counselling services in school - and the stark reality, he said, is that 90% of prisoners are early school leavers.

An emergency motion calling on the Government to immediately restore the quota of guidance counsellors was passed unanimously by the delegates.

In a wide-ranging speech, Mr Broderick also called for the careful analysis of any proposals for major changes in the curriculum, and for the halting of cuts in pay and conditions which are undermining the teaching profession.

He urged the minister not to allow his stated enthusiasm for investment in education to be compromised by the demands of other government departments.

Minister Quinn began his round of the annual teachers conferences this morning at the INTO gathering in Killarney, Co Kerry.

The minister warned delegates that the current dire economic and fiscal situation could not be dealt with in isolation to the total education spend.

INTO General Secretary Sheila Nunan told delegates and the Minister for Education that there is no lack of comprehension about the economy among teachers.

Responding to a claim by Mr Quinn that there was still not a full understanding of the depth of the fiscal crisis, Ms Nunan said that teachers "absolutely got it".

To heavy applause from the floor, Ms Nunan said teachers did not need to be reminded, that they felt it and were dealing with the impact of the crisis every day in the classroom.

Ms Nunan said the Government had got industrial peace from teachers and she warned that maintaining guarantees given under the Croke Park Agreement was absolutely essential if that peace was to continue.

Minister Quinn told delegates that a Yes vote in the fiscal treaty referendum is a key step in regaining Ireland’s independence.

Around 40 delegates stood in protest as he began his speech, most of them protesting at budget cuts to small schools.

His speech was punctuated by some heckling from the floor. However, there was also applause at times.

Delegates groaned when the minister said he wanted to talk about the difficult budgetary position. However, some delegates applauded when he praised the work that teachers do.

Elsewhere, delegates at the Teachers’ Union of Ireland conference in Wexford have been told it would be a grave mistake by the Government if it decides to cut teachers’ allowances.

TUI President Bernie Ruane has warned that if the Government goes down this road they will ballot members for what it terms appropriate action.

Anti-discrimination proposals to be published

Minister Quinn told delegates he will publish proposals in the coming weeks to remove discrimination against gay and lesbian teachers taking up employment.

He said the Programme for Government contains a commitment to do this and he intends to fulfil this commitment.

Mr Quinn responded by saying that it was a three-year plan and that he will invite all parties to debate the issue when the full report is published in a matter of weeks. 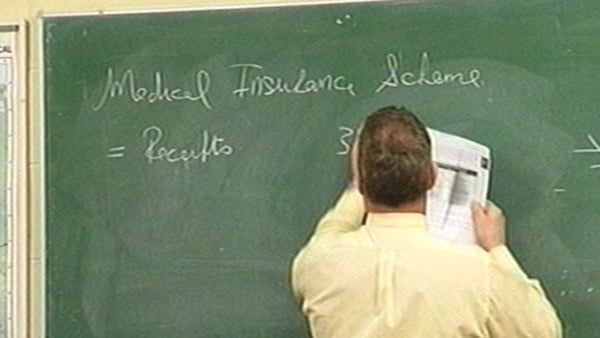