Pro-democracy leader Aung San Suu Kyi has hailed a "new era" for Burma and called for political unity after her party swept to victory in elections.

It said that her National League for Democracy (NLD) party secured 40 of the 44 seats it contested, according to partial official results.

Supporters celebrated into the night after the NLD declared that Ms Suu Kyi, who was locked up by the former junta for most of the past 22 years, had secured a seat after yesterday's by-elections.

"This is not so much our triumph as a triumph for people who have decided that they must be involved in the political process in this country," Ms Suu Kyi said.

"We hope this will be the beginning of a new era."

Ms Suu Kyi struck a conciliatory tone towards the other political parties as she prepares to take her place in a parliament that will remain dominated by the military and its political allies.

"We hope that all parties that took part in the elections will be in a position to cooperate with us in order to create a genuinely democratic atmosphere in our nation," she said.

The NLD said that its own tally showed it had taken at least 43 seats. In total, 45 seats were available.

The Burmese government has surprised even its critics over the past year with a string of reforms, such as releasing hundreds of political prisoners, but ethnic conflict and alleged rights abuses remain concerns for the West.

The EU held out the prospect of further easing sanctions, while the White House congratulated Ms Suu Kyi and voiced hope that her election would lead to greater reform.

"We will continue to support the ongoing reforms and look forward to developing a new and cooperative relationship as these go forward," said EU foreign policy chief Catherine Ashton, who is expected to visit the country later this month.

The NLD swept to a landslide election victory in 1990, when Ms Suu Kyi was in detention, but the junta never recognised the result. 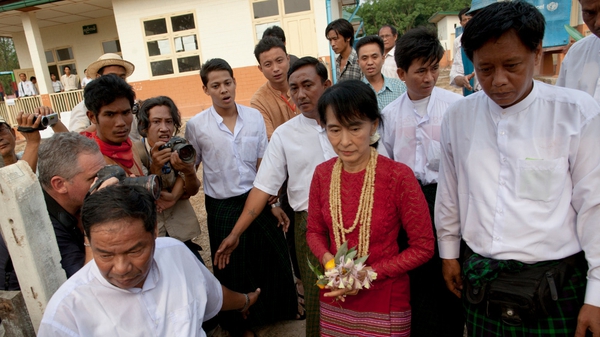