The Department of the Environment has said that post offices are not collecting payments for the household charge over the counter and no arrangements have been made to allow this.

The Minister for Social Protection Joan Burton said earlier today that it would have been her preference that the €100 charge should have been payable at post offices from the beginning.

She urged all homeowners to make next Saturday's deadline - which she called ambitious but insisted that it would not be extended.

Ms Burton said the law on the issue is set out but she hoped "as much facilitation is given to people as possible".

Meanwhile, Mick O'Reilly of the Dublin Council of Trade Unions said a suggestion that council workers be asked to go door to door to collect the tax was outrageous.

Where individuals refuse to carry out these instructions they should be fully supported by the trade union movement, he added.

Latest figures suggest around 328,000 or just 20% of the 1.6 million liable households, have so far paid or registered to do so.

The Government says it is confident that number will rise significantly in the coming days.

Registration forms for the payment are available in post offices, and people can fill out their forms, and post them along with a cheque or postal order, in the post office. Payments can be made over the counter at local authority offices. 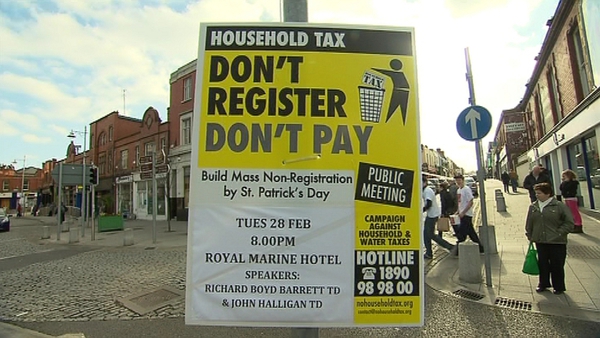