Thousands of trade unionists, communists and pensioners angry at punishing spending cuts in Greece have marched through central Athens.

The Greek parliament debated a string of measures demanded by eurozone states in exchange for a €130bn rescue, endorsed by finance ministers yesterday after hours of torturous negotiation in Brussels.

However, Athens suffered a fresh setback when international ratings agency Fitch said a Greek debt default was "highly likely in the near term" despite the latest aid.

The downgrade came ahead of a planned bond swap under which Greece will enforce sharp losses on private creditors as part of the bailout programme.

It was the first of widely expected cuts from all rating agencies because Greece will pass into technical default on its liabilities once the transaction is completed, which Finance Minister Evangelos Venizelos said must take place by 12 March.

When the bond swap is done the sovereign rating will drop further to 'restricted default' and then will be re-rated again "at a level consistent with the agency's assessment of its post-default structure and credit profile," Fitch said.

Greece also had to revise up its public deficit targets before the ink on yesterday’s eurozone rescue deal had even dried.

In a draft law on additional austerity measures to secure the massive public and private sector bailout, the government raised its 2012 deficit forecast to 6.7% of GDP from 5.4%.

Parliament also debated reforms to the health care system aimed at additional cost cuts of up to €1bn in 2012 by merging hospitals.

Doctors and medical workers have called a 24-hour strike for Thursday.

Several thousand demonstrators snaked through Athens today, as others huddled in the rain in front of riot police guarding parliament against a possible repeat of riots 10 days ago. 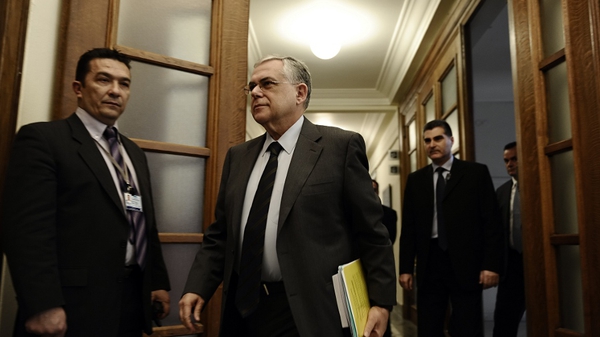