Syrian government forces killed more than 60 people in assaults on villages and an artillery barrage in Homs, activists said.

Activists said at least 30 people died in the bombardment of the Baba Amro neighbourhood of Homs city, and at least 33 were killed when forces trying to crush opposition to President Bashar al-Assad stormed villages in northern Idlib province.

The International Committee of the Red Cross said it had asked authorities and rebels to agree daily ceasefires so life-saving aid can reach civilians in hard-hit areas including Homs.

The British-based opposition Syrian Observatory for Human Rights said security forces had stormed villages in Idlib province in the north of the country.

Government curbs on media access make it hard to verify details of fighting but international rights and aid organisations say hundreds of people have been killed in recent weeks in Homs.

Meanwhile, Western and Arab nations who want President Assad to relinquish power are preparing an explicit gesture of support for his opponents.

US Secretary of State Hillary Clinton said an inaugural “Friends of Syria” meeting in Tunisia on Friday would show that his government was increasingly isolated and offer support for "the brave Syrian people".

President Assad yesterday accused foreigners of funding and arming "terrorist groups" with the aim of destabilising the country, as Iranian warships docked at the port of Tartus in a show of force.

Despite a weekend appeal by a visiting Chinese envoy in Damascus for the violence to stop, monitors said regime forces targeted the central city of Homs for a 17th straight day.

Republican US Senator John McCain has called for the opposition to be given weapons to help "defend themselves," while ruling out direct US aid.

Activists say more than 6,000 people have died in the Assad regime's 11-month crackdown on dissent. 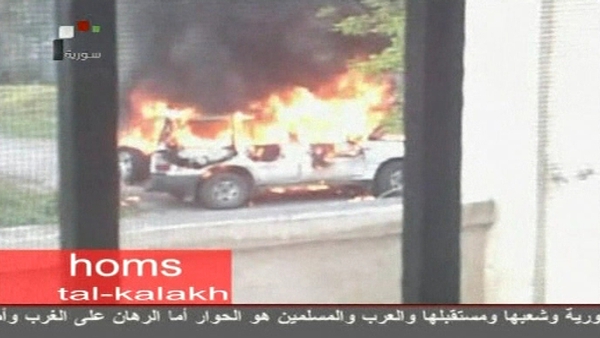