Confidential documents released to RTÉ News by the US Government show that officials in the Treasury Department were concerned that the Irish bailout could be derailed by poor growth and a lack of Government spending.

The documents detail how US Treasury Secretary Tim Geithner used a meeting with Finance Minister Michael Noonan in order to assess domestic threats to the Irish bailout.

Briefing notes also reveal that Mr Geithner was acutely aware of allegations - made here in Ireland - that he had personally vetoed plans to burn Irish bank bondholders.

According to the documents, Mr Geithner used two separate meetings with Taoiseach Enda Kenny and Minister Noonan to assess risks to the bailout "both domestic and external".

His officials noted that the new coalition had campaigned on promises to renegotiate the bailout.

Officials encouraged Mr Geithner to quiz Mr Noonan on how the Irish economy could grow when its main trading partners were experiencing problems, noting that the success of Ireland's bailout programme would depend heavily on export growth.

They noted that the size of the Government deficit precluded the prospect of any stimulus spending and that the euro had appreciated against the dollar and the pound.

They also sought clarity on how the Irish Government planned to raise money for the Irish banking system - concentrating on junior-bond holders, many of whom were based in the US.

Mr Geithner was also warned about concerns in Ireland that he had personally vetoed plans to burn bank bondholders during the bailout talks.

A note told him to expect questions from Mr Noonan about his contact with the IMF on the matter and that the Taoiseach faced "sharp domestic criticism" after admitting to not asking President Barack Obama about it during the Presidential visit.

The documents also reveal that Mr Geithner came under political pressure on Capitol Hill due to worries that Ireland might default on its International Monetary Fund loans.

Senators wrote to the Treasury Secretary over their concern that the US might be lending to a country that had behaved irresponsibly.

Mr Geithner responded saying the US taxpayer had never lost a cent from an IMF loan and he was confident it would be repaid in full.

Meanwhile, Finance Minister Michael Noonan has said it is ''ludicrous'' to talk about a second bailout programme for Ireland.

Speaking as he arrived at Government Buildings today, he said such talk was speculation by economists who "at the start of the year speculate on these matters."

He said the fifth review of the current programme has just commenced and is going well.

Upon his arrival, Taoiseach Enda Kenny said there is no question of a second bailout. 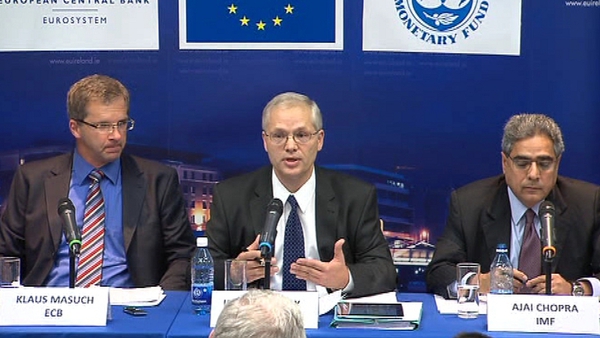