Syrian President Bashar al-Assad has said a referendum will be held in March on a new constitution to replace the current charter, which enshrines his Baath party's dominant role.

Mr Assad also said he welcomed the idea of expanding the government to include "all political forces".

"After legislation has been drawn up and a constitution ... we will call a referendum ... (maybe) in the first week of March," he said, adding that it would be followed by a general election.

"Elections must be linked to a new constitution," he said. "They could be at the start of May."

The Syrian leader made the comments during a speech at Damascus University.

His regime has come under increased pressure as a result of its response to ongoing tensions between security forces and opponents of the government.

The United Nations has said that over 5,000 people have been killed by authorities over the past ten months as it tries to stamp out protests by those seeking democratic elections.

Syria agreed a peace plan with the Arab League that would see security forces withdraw from towns and cities and political prisoners released.

An observer team is currently in the country to oversee the implementation of the plan, but so far it has faced criticism for its failure to quell the violence.

However, Mr Assad said that Syria will not "close doors" to Arab solutions to the ten-month crisis as long as "it respects Syria's sovereignty".

He also denied that any orders had been given to security forces to open fire on civilians during the ten months of protests rocking his rule.

"By law, nobody can open fire, except in self-defence," he said, claiming that the violence is a result of terrorist attempts to destabilise the country.

He said his priority was to restore order in Syria, which he said could only be achieved by "hitting terrorists with an iron fist".

''There is no tolerance with terrorism or with those who use weapons to kill," he said. 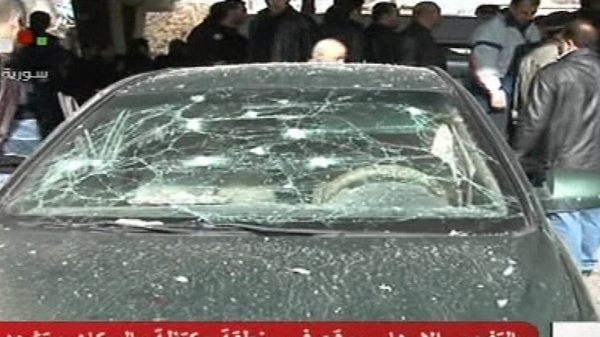 '26 killed' in blast in Damascus