The people of the Czech Republic have bid an emotional farewell to the former president, playwright and dissident Vaclav Havel, who died last Sunday at the age of 75.

Up to 50 world leaders attended the funeral in Prague this morning, paying tribute to the man who led the Velvet Revolution in 1989 and toppled the Communist regime

Church bells rang out across the country to mark the beginning of the funeral of Mr Havel this morning.

Over 1,000 mourners gathered at the capital's main cathedral, as thousands more stood outside watching the proceedings on large screens.

The Archbishop of Prague Dominik Duka, who led the funeral mass, also spent time in jail with Mr Havel during Communist rule.

Many other Czech dissidents attended, along with Mr Havel's friend and Poland's former President Lech Walesa, who led the anti-communist Solidarity movement.

Brian McElduff, who is the Chargé d'Affaires in Prague, represented the Government at the funeral. Former President Mary Robinson also attended.

In statement Tánaiste and Minister for Foreign Affairs Eamon Gilmore said: "I believe that Vaclav Havel's personal bravery and example in opposition to Soviet totalitarianism inspired ordinary people across central and eastern Europe to reclaim their freedom."

Mr Havel was a long-time-a chain-smoker and died as a result of chronic respiratory problems.

He was buried at his family's plot in the north of the Czech Republic, but he will be forever remembered as the man who led his country to freedom and inspired millions of others around the world. 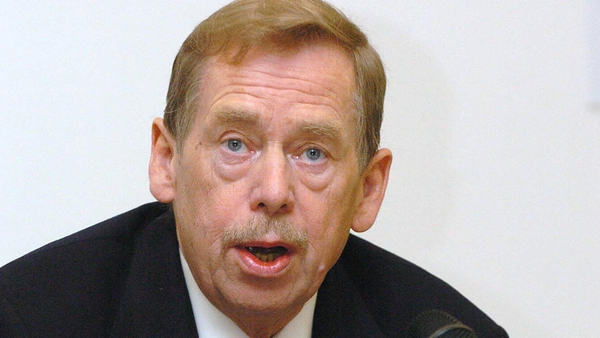