The last US forces left Iraq and entered Kuwait, nearly nine years after launching a divisive war to oust Saddam Hussein, and just as the oil-rich country grapples with renewed political deadlock.

The last of roughly 110 vehicles carrying 500-odd troops mostly belonging to the 3rd Brigade, 1st Cavalry Division, crossed the border at 7.38am (4.38am Irish time), leaving just a couple of hundred soldiers at the US embassy, in a country where there were once nearly 170,000 troops on 505 bases.

It ends a war that left over 100,000 Iraqis and nearly 4,500 American soldiers dead, many more wounded, and 1.75 million Iraqis displaced, after the US-led invasion unleashed brutal sectarian killing.

The last group of vehicles transporting US troops out of Iraq left the recently handed over Imam Ali Base outside the southern city of Nasiriyah at 2:30 am to make the 350km journey south to the Kuwaiti border.

They travelled down a mostly-deserted route, which US forces paid Shiite tribal sheikhs to regularly inspect to ensure no attacks could take place.

Five hours later, they crossed a berm at the Kuwaiti border lit with floodlights and ringed with barbed wire.

"I am proud -- all Iraqis should be proud, like all those whose country has been freed," 26-year-old baker Safa, who did not want to give his real name, said in Baghdad.

"The Americans toppled Saddam, but our lives since then have gone backward."

The withdrawal comes as Iraq struggles with renewed political deadlock as its main Sunni-backed bloc said it was boycotting parliament and Prime Minister Nuri al-Maliki, a Shiite, moved to oust one of his deputies, a Sunni Arab.

Maliki sent an official letter to parliament calling on MPs to withdraw confidence in Deputy Prime Minister Saleh al-Mutlak, a member of the secular Iraqiya party, after Mutlak accused the premier of being "worse than Saddam", an aide to the prime minister said.

A day earlier, Iraqiya, which emerged as the largest bloc in inconclusive 2010 polls but was unable to form a government, said it was boycotting parliament to protest what it said was Maliki's centralisation of power.

The bloc, which controls 82 seats in the 325-member legislature and nine ministerial posts, has not, however, pulled out of Iraq's national unity government.

Iraqiya said the government's actions, which it claimed included stationing tanks and armoured vehicles outside the houses of its leaders in the heavily-fortified Green Zone, "drives people to want to rid themselves of the strong arm of central power as far as the constitution allows them to."

Provincial authorities in three Sunni-majority provinces north and west of Baghdad have all moved take up the option of similar autonomy to that enjoyed by Kurds in north Iraq, drawing an angry response from Maliki.

Key political issues such as reform of the mostly state-run economy and a law to regulate and organise the lucrative energy sector also remain unresolved, to say nothing of an explosive territorial dispute between Arabs and Kurds centred around the northern oil hub of Kirkuk.

Sunday's completion of the withdrawal brings to a close nearly nine years of American military involvement in Iraq, beginning with a "shock and awe" campaign in 2003 to oust Saddam, which many in Washington believed would see US forces conclude their mission in Iraq within months.

But key decisions taken at the time have since been widely criticised as fuelling what became a bloody Sunni Arab insurgency, in particular dissolving the Iraqi army and purging the civil service of all members of Saddam's Baath Party, including lower-ranking members.

The insurgency eventually sparked communal bloodshed, particularly after the February 2006 bombing of a Shiite shrine in the predominantly Sunni city of Samarra by Al-Qaeda.

More than 100,000 Iraqis have been reported killed in violence since the invasion, according to British NGO Iraq Body Count.

The bloodshed was only quelled when then-US president George W Bush ordered a "surge" of American troops to Iraq, and Sunni tribal militias sided with US forces against Al-Qaeda.

Baghdad and Washington signed a 2008 pact that called for the withdrawal by the end of this year, and in the summer of last year, the US declared a formal end to combat operations while maintaining fewer than 50,000 troops in Iraq.

The US embassy will now retain just 157 US soldiers, for training of Iraqi forces, and a group of Marines to secure the diplomatic mission.

Attacks in Iraq remain common but violence has declined significantly since its peak.

Iraq has a 900,000-strong security force that many believe, while capable of maintaining internal security, lacks the means to defend its borders, airspace and territorial waters.

Some observers also fear a return to bloody sectarianism, doubt the strength of Iraq's political structures, and feel that Maliki has entrenched his power base to the detriment of the country's minorities. 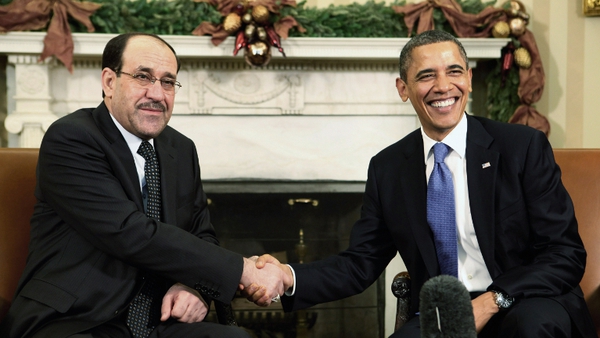