German Chancellor Angela Merkel has rejected any "quick-fix ideas" to try to resolve the European financial crisis and warned that a solution will take years.

In a key address to the German parliament - ahead of next week's summit of EU leaders - she said a new treaty was needed to establish a fiscal union in Europe.

Ms Merkel added that it would be a "fiscal union with strict rules, at least for the eurozone".

The German Chancellor will hold talks with President Sarkozy on Monday to hammer out a common position ahead of the gathering.

Ms Merkel said the last gruelling months - packed with market turmoil, the threat of Greek default on its towering debts and political strife in the European Union - had focused minds.

"Anyone who had said a few months ago that we, at the end of 2011, would be taking very serious and concrete steps toward a European stability union, a European fiscal union, toward introducing (budgetary) intervention in Europe would have been considered crazy," she said.

"Now these items are on the agenda, we are on the verge of it, there are still difficulties to be surmounted but their necessity is now widely recognised."

Call for 'zone of stability'

Her address follows last night's appeal by Mr Sarkozy for Europe to be "refounded" in order to create "a zone of stability".

Mr Sarkozy said EU treaty changes would be required to ensure closer economic governance and more qualified majority voting - matters which will be discussed by EU heads of state in Brussels next week.

With one eye on next year's French Presidential election, Mr Sarkozy spoke not just about reducing the country's debt, but also immigration reform and tax reform - a nod to Ireland's low corporation tax rate.

Speaking this morning, Tánaiste Eamon Gilmore insisted that Ireland would retain its own rate of corporation tax.

However more than anything else, the theme of President Sarkozy's speech was about saving the euro.

Mr Sarkozy said French debt could double overnight if the currency collapsed - something that he, as President of France, would not allow to happen.

He also confirmed that both he and Ms Merkel would outline proposed treaty changes on Monday, changes which would impose greater fiscal discipline on the eurozone.

In what appears to be carefully co-ordinated political theatre, the President of the European Central Bank, Mario Draghi, earlier hinted the ECB would take stronger action, if political leaders agree on much tighter budget controls.

Meanwhile, Minster for European Affairs Lucinda Creighton has said any changes to EU treaties would have to be addressed at next week’s summit of EU leaders.

Speaking on RTÉ's Prime Time programme last night, Minister Creighton said any decision the Government takes will be in the best interests of the Irish people. 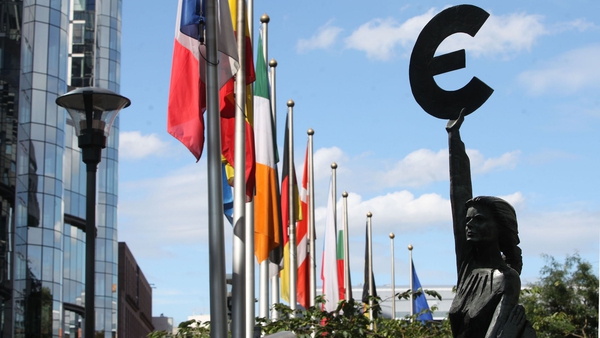