New York judge rejected a bid by Occupy Wall Street protesters to return with their tents to a Manhattan park they had been evicted from.

The protesters will be allowed to return to Zuccotti Park, where they camped for the past two months, but will have to abide by the park rules, designed to prevent them from setting up a camp again, that included a ban on sleeping bags, tents and the storage of belongings in the space.

The ruling by Judge Michael Stallman rejected an earlier court motion that put a temporary stay on the city's decision to ban Occupy Wall Street protesters from returning to Zuccotti Park with tents and other camping gear.

Earlier, NYPD spokesman Paul Browne said that about 70 protesters were arrested in Zuccotti Park during the overnight operation for defying orders to leave and several more were arrested nearby, although most left voluntarily.

Authorities declared that the continued occupation of Zuccotti Park, where hundreds of demonstrators had been sleeping in tents, posed a health and safety threat.

The office of New York City Mayor Michael Bloomberg said the protesters were ordered to "temporarily leave" the park and remove their tents.

Police said protesters would be allowed to return once the park was cleaned, but would have to abide by rules banning items such as tents, tarps and the storage of belongings.

The protesters had set up camp in Zuccotti Park on 17 September to protest against a financial system they say mostly benefits corporations and the wealthy.

Their movement has inspired similar protests against economic inequality in other cities, including on Dame Street in Dublin.

Police have since barricaded streets around the park, which had been lit up with spotlights, and are keeping people back from the site.

The operation began at around 1am (6am Irish time) and the last protesters were evicted by about 4.15am (9.15am).

Police used a loudspeaker to tell protesters they would be arrested if they did not leave. 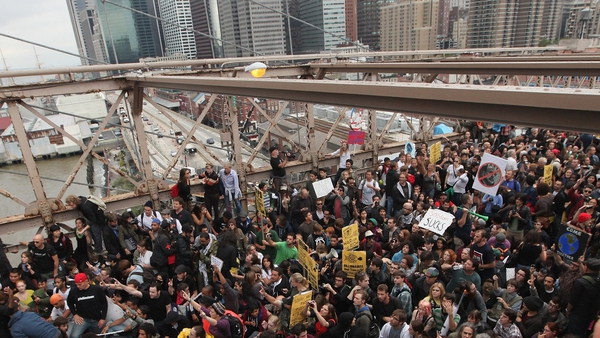