Five of the Gaza campaigners detained in Israel have returned to Dublin tonight.

The Department of Foreign Affairs confirmed earlier that the five boarded a Lufthansa flight to Germany where they were due to get a connection to Dublin.

Two of the seven did not board the flight as arranged.

14 Irish people were detained after their boat, the MV Saoirse, was intercepted by the Israeli navy when attempting to break the Gaza blockade last week.

It is understood arrangements are being made to get a flight for the remaining two and that seven remaining Irish citizens are due to depart Tel Aviv on an El Al flight tomorrow morning.

The Department of Foreign Affairs said the Israeli authorities had informed them that the seven had missed an earlier flight this morning because of problems arising with the carrier airline which prevented the departure of the group.

A spokesman for the department said that as result of both delays today, the Irish authorities lodged a further protest with the Israeli foreign ministry and the Israeli Embassy in Dublin.

The Irish authorities have also told their Israeli counterparts that they expect all the detainees to have returned to Ireland by tomorrow afternoon.

The Tánaiste and Minister for Foreign Affairs, Eamon Gilmore, met the Israeli Ambassador yesterday evening to press for their early release.

A spokesman for the Israeli Embassy said that the Irish detainees were responsible for the delays in their return to Ireland.

He said if they co-operated with the Israeli authorities they would have returned to Ireland days ago.

In the Dáil, Socialist TD Joe Higgins accused the Tánaiste of doing nothing to secure the release of Irish citizens.

Deputy Higgins called on Mr Gilmore to call the Israeli Ambassador for a meeting to find out what was happening to the 14, whom he said were now incommunicado.

Mr Gilmore said it was his understanding that the airline had refused to board all seven together this morning.

The Tánaiste said the delay in the departure of two Irish activists was due to "security clearance" problems.

But he said he did not understand how there could be security clearance issues about people who were already in custody.

He said the Irish Government's disappointment had been conveyed to the Israeli government. 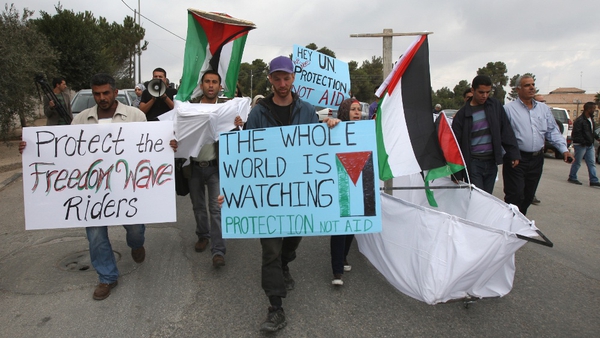