President Mary McAleese says she has a sense of gratitude and sadness on leaving office after 14 years.

Speaking at her final public engagement in Dublin, Mrs McAleese said she loved every day as President and it was a wonderful opportunity.

President McAleese moved out of Áras an Uachtaráin this afternoon ahead of tomorrow's inauguration of Michael D Higgins.

The President performed her final official engagement this morning - a visit to a hostel for homeless men in Dublin.

She formally opened a refurbished building at the St Vincent de Paul Hostel near Christchurch Cathedral, which will provide permanent accommodation for 18 men who had been homeless.

Another part of the hostel will continue to provide emergency services for homeless people.

Over the past few weeks, Mrs McAleese held a number of receptions for large groups of people who have helped her while President.

Mrs McAleese will be on the platform at Dublin Castle at midday tomorrow when her successor, Michael D Higgins, becomes ninth President of Ireland.

In the Dáil numerous TDs paid tributes to Ms McAleese.

Taoiseach Enda Kenny said she carried out her role with real equality and leaves the country so much the better for her being President.

Mr Kenny paid tribute to the fluency she achieved in humanising the role of President and never taking from the dignity of the office.

Tánaiste Eamon Gilmore said Ms McAleese had won not just the minds of the Irish people, but their hearts.

He paid tribute to the work that the President and her husband did on securing peace in the North and the tireless work she did in improving relations with our nearest neighbours in the UK.

He described her as a true embodiment of public service.

He commended her overwhelming commitment to serve the Irish people.

Deputy Martin said the country had benefited from her as President, particularly in the peace process.

He said she would remembered as a President who had made a contribution to a long-term, lasting peace.

Deputy Ó Caoláin said she had proved her detractors wrong in a Presidency that would be remembered.

He also praised her role in reaching out to people with disabilities.

Maureen O'Sullivan said she be remembered for the healing words that she used.

Deputy O'Sullivan paid tribute to the outgoing President's human touch and said she had truly done the State some service. 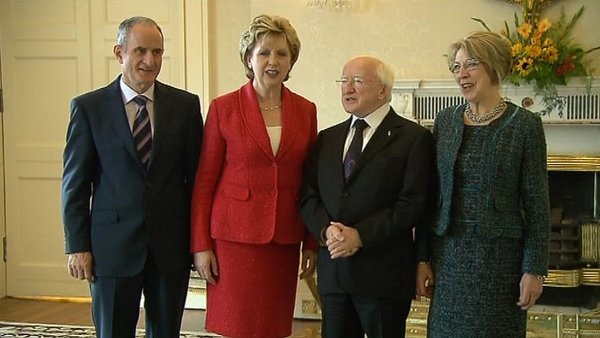 President meets successor at the Áras