Minister of State at the Department of Finance Brian Hayes has described the refusal of AIB and Bank of Ireland to pass on ECB interest rate reductions as "pathetic".

Following a two-hour meeting with Taoiseach Enda Kenny and other ministers, AIB ruled out passing on rate cuts on the basis that they had not increased rates in line with ECB hikes earlier this year.

Bank of Ireland has refused to comment on the issue.

Mr Hayes said that at the meeting, the Taoiseach, Tánaiste Eamon Gilmore, Minister for Finance Michael Noonan and Minister for Public Expenditure and Reform Brendan Howlin had put it to the banks "starkly and clearly" that rate reductions should be passed on immediately.

He said they were very disappointed by the response, adding that it was pathetic that banks bailed out by the Irish taxpayer should decide not to pass on rate cuts.

Asked whether the Government would consider further action on bankers' pay in light of today's events, Mr Hayes said they were ruling nothing in or out.

The party is drawing up legislation to give the Financial Regulator powers to intervene in such circumstances.

Mr Noonan said the refusal of banks to pass on interest rate cuts was "a serious issue".

Mr Noonan said the ECB had lowered interest rates in order to avoid recession, and it was difficult to see why Irish banks should not follow suit.

He said AIB were in a different position, as it hadn't passed on previous rate increases, unlike Bank of Ireland and Ulster Bank.

Asked if the Government would now revisit the issue of bankers pay, Mr Noonan said they would wait and see what Mathew Elderfield said in response to the Taoiseach's call this afternoon.

Representatives of AIB, Bank of Ireland and Ulster Bank appeared before the Government's Economic Management Council today to discuss whether they are meeting their target of lending €6bn to small business.

The €6bn target applied to AIB and Bank of Ireland, which were due to lend €3bn each to the small business sector.

However, Ulster Bank also attended as the third largest lender to small business.

Business groups have consistently complained that they are unable to get access to credit and have criticised the failure of banks to pass on the most recent ECB rate cut.

Today the small business lobby group, ISME, called for stiff sanctions for banks who refuse to pass on the rate cuts.

Asked why BoI was not passing on the recent ECB rate cut, Bank of Ireland chief executive Richie Boucher said they look at all their rates on an on-going basis taking all factors into account.

ISME urged the Government to force banks to start lending to viable businesses.

Its chief executive Mark Fielding accused the banks of being hell-bent on ignoring the authorities and sabotaging the economy in the pursuit of their selfish interests.

The head of the Credit Review Office John Trethowan will also attend the meeting. 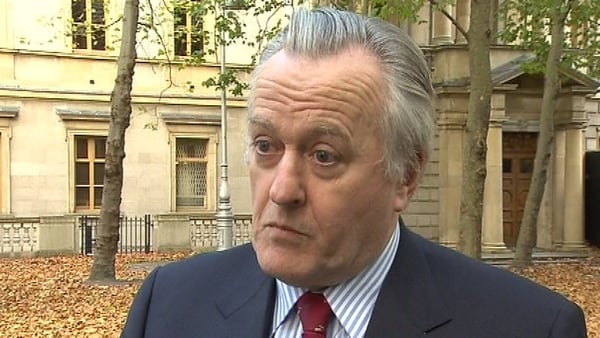