A short-term Greek coalition government will be announced tomorrow following a meeting of party leaders, a government official said.

Prime Minister George Papandreou will also meet the country's president tomorrow, the official said, declining to elaborate on what the two men would discuss.

The meeting with President Karolos Papoulias will take place by 10am Irish time, the official, who declined to be named, told reporters.

Greece's party leaders have been locked in talks since yesterday on who will lead a short-term coalition, agreed to push through an EU/IM bailout deal, until early elections in February.

European Central Bank deputy head Lucas Papademos is tipped to be the new prime minister of a crisis coalition, but details have yet to be ironed out, a source from the ruling socialists has said.

"Negotiations are being finalised with Papademos as PM," the party source, with knowledge of the talks, told Reuters.

"They are going through the final details."

The current socialist cabinet is due to step down and make way for a coalition of national unity under an agreement between the governing and opposition parties on Sunday.

Earlier, ministers held an emergency session at which outgoing Mr Papandreou asked them to prepare their resignations, according to the country's state news agency.

"Prime Minister George Papandreou has asked the members of the cabinet to have their resignations ready," the Athens News Agency said without citing sources.

Greek party leaders have been struggling to agree on a new premier, despite pressure coming from the European Union for the country to push through a bailout aimed at ending the chaos threatening the euro.

An accord on who will lead the coalition was not reached yesterday as expected, despite Mr Papademos emerging as a frontrunner.

Frustration was apparent in Brussels where officials said the new government had to show it was serious about implementing promises Athens has made to its EU and IMF lenders in return for the €130bn bailout.

The EU has asked Greece to produce a letter promising implementation of the bailout deal.

"It is essential that the entire political class is now restoring the confidence that had been lost in the Greek commitment to the EU/IMF programme," said EU Economic and Monetary Affairs Commissioner Olli Rehn.

Mr Rehn said the coalition must "express a clear commitment on paper, in writing, to the EU/IMF programme".

Mr Papademos oversaw the nation's adoption of the euro in 2002 as Bank of Greece governor before moving to the ECB, and is a well-known figure in European capitals.

Some Greek media speculated that he was setting tough conditions, demanding greater powers than Mr Papandreou or conservative leader Antonis Samaras were prepared to give.

A source at the New Democracy party, which Mr Samaras leads, said it would support the new government but wanted no cabinet posts.

Current Finance Minister Evangelos Venizelos, a member of the PASOK socialist party, could stay in his post for the sake of continuity, said the source, giving the first indication of who would occupy any of the cabinet posts.

New Democracy would back the 2012 budget and a bond swap plan contained in the bailout package, under which the value of banks' holdings of Greek government debt would be halved.

However, PASOK had to hand certain major ministries - including any involved in running next February's elections - such as justice, the interior and even defence to non-party technocrats, he said.

Some Greek media said such demands were a sticking point, with PASOK unwilling to let New Democracy duck out of a government that must take unpopular decisions to tackle the huge budget deficit and make the economy more competitive. 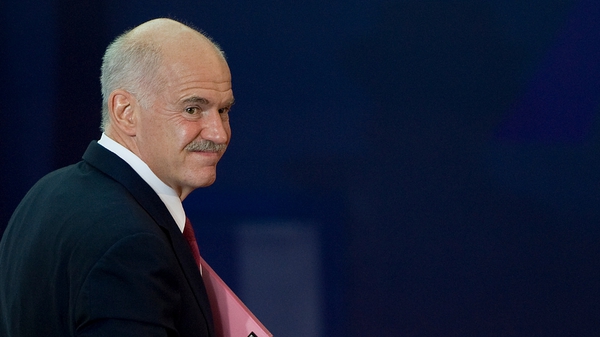