Minister for Finance Michael Noonan has described the payment of more than €700m to Anglo Irish Bank bondholders as "the lesser of two evils".

Mr Noonan said it was more in the interests of the Irish people to “grit our teeth” and pay the bond rather than defaulting, which he said would “drive us over the edge of the cliff”.

He asked deputies to imagine the chaos in Europe if a second front was opened by an Irish default.

He said he was not going to put the Irish people in such a position.

The minister was responding to a Topical Issues question put down by Independents Stephen Donnelly and Mick Wallace.

Deputy Donnelly said he did not accept the argument of a contagion risk from not paying unguaranteed bondholders and accused former ECB President Jean Claude Trichet of talking nonsense.

Mr Donnelly said the EU-IMF agreement makes no reference to these bonds and in honouring them we are being held to something beyond the IMF agreement.

Deputy Wallace said the rules in Europe are changing by the month and bondholders are going to be “taking it on the chin” a lot more in the future.

He said pressure should continue to be applied for a better deal.

Minister Noonan said he did not disagree with Deputy Wallace, that the Government promise was to continue to renegotiate the deal and that was what it was doing.

Sinn Féin and United Left Alliance TDs walked out of the Dáil earlier in protest against the Government's decision not to hold a debate on the payment of €700m to Anglo bondholders.

The Dáil voted on the Order of Business after some Opposition TDs sought a debate and a vote on the payment.

That vote, and a walk through vote which followed, were both carried - meaning there would be no debate on the payment.

Anger and frustration was palpable in the Dáil over the Government's decision to pay Anglo bondholders and not facilitate a debate on it.

Independent Shane Ross asked the Taoiseach why the Government did not instruct Anglo Irish Bank to embark on a buy-back campaign of bonds.

Sinn Féin was first to leave the chamber, followed by members of the United Left Alliance, led by Richard Boyd Barrett.

"You will not even give the parliament the right to vote on the handover of all the money you have taken out of the health service," said Mr Barrett.

Taoiseach Enda Kenny said the Government, in discussions with the ECB, sought to repudiate the situation with regard to bondholders, but the ECB would not give its consent.

Mr Kenny said he was not one for hysterics and said if deputies wanted to walk out they were free to do so.

The Taoiseach said he would love to say it was not necessary to pay the money, however when the Minister for Finance tried to negotiate with the ECB on the money it was not possible.

"The position of the Government was clear in February when we were elected on a mandate to pursue growth and not default."

He was responding to Fianna Fáil leader Micheál Martin who quoted Government party promises that Anglo would not get "another red cent".

Mr Martin said promises to burn the bondholders had driven down the price leading to a situation where today's bondholders were getting double the return on their investment.

He accused the Government of failing to put the issue on the negotiating table.

The Taoiseach also told the Dáil he does not know the names of the bondholders who will benefit from today's payment.

He was responding to Sinn Féin's Gerry Adams, who said there was a need for transparency.

Deputy Adams asked the Taoiseach to get on the phone to the chairman of Anglo Irish Bank and tell him to withhold the payment.

The Sinn Féin leader said the golden circle is still in place, citing the chairman's political allegiance as a former leader of Fine Gael who still keeps his TD pension and current salary. 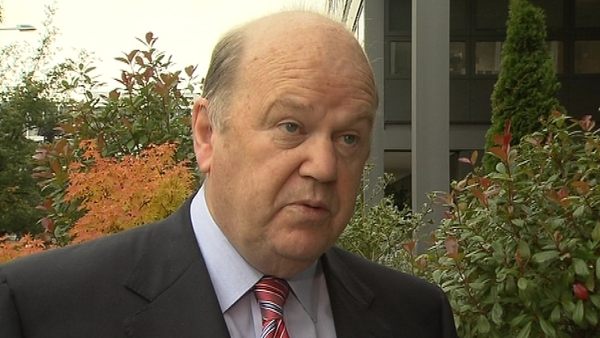