Polls due to appear in The Sunday Business Post and Sunday Times newspapers both show Mr Gallagher holding a commanding lead, with Mr Higgins trailing in second place.

Mr Gallagher soared ahead in the polls last week and had become the subject of increased media scrutiny as a result. He also became the focus of some of the other candidates’ criticisms.

However this appears to have had little impact on his appeal to voters.

The Sunday Business Post / Red C poll has Mr Gallagher on 40%, up one point on last week’s figures.

Mr Higgins, meanwhile, polls second at 26%, down one point.

Martin McGuinness polls third with 13%, unchanged on last week, David Norris enjoys a three point rise to 10%, while Gay Mitchell is down two points to 6%.

Dana Rosemary Scallon polls second from bottom at 3%, up one point, while Mary Davis suffers a two point drop to 2%.

The poll was taken between Tuesday and Thursday of last week and asked the opinions of 1,000 voters.

The Sunday Times’ poll, carried out between Sunday and Tuesday by Behaviour and Attitudes, also shows Mr Gallagher with a strong lead over the field.

The Sunday Times poll also asked about the two referendums which are to be carried out on Thursday as well, and both look likely to be passed.

On the judicial pay referendum, 87% said they intended to vote yes; just 8% said they will vote no and 5% are undecided.

On strengthening Oireachtas investigations, 76% are in favour of the amendment, 18% opposed, while 6% are undecided.

All seven candidates took part in a radio debate this afternoon as campaigning in the Presidential election continues over the weekend.

The 80-minute long debate was held in Dublin City University earlier and was broadcast on RTÉ's Radio 1 this afternoon.

Among the issues discussed were the health system, ageism, support for small business and how each candidate would bring value for money to the office.

The candidates were also asked about this week’s job losses at Aviva Insurance and the problems at the Priory Hall apartment block in north Dublin.

Each of the candidates later continued their canvassing in other parts of the country. 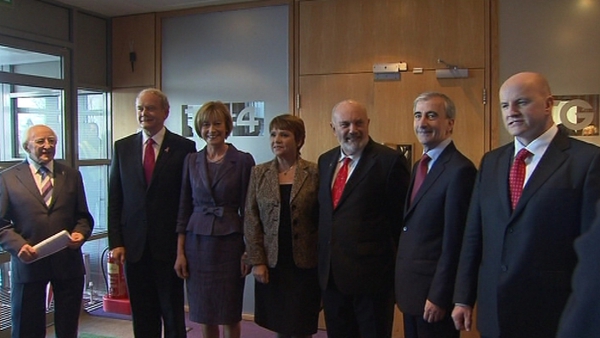