A tape has emerged of a controversial conversation in 2002 between Presidential candidate David Norris and journalist Helen Lucy Burke.

The tape, which was broadcast on RTÉ's Liveline programme, confirms that Mr Norris made a number of comments about the age of consent attributed to him in an article written by Ms Burke.

When she spoke publicly about the interview in May, Senator Norris called on her to make the tape widely available, as he believed it would clearly show that he did not make the controversial remarks.

This afternoon, Mr Norris reacted to the playing of the interview by saying there is nothing new in the tape.

He said that it surfaced ten years ago, was brought up again in May and that it is all exactly the same material. He said he had already dealt with it comprehensively.

When questioned about a comment he made regarding a man putting his hand inside a child's pocket, Senator Norris said he never condoned it and that he condemned it.

He said putting a hand inside a child's pocket is deeply disgusting behaviour, is wrong and can be damaging to a young person.

Mr Norris also said it is of a different order of magnitude to the rape and murder of an infant.

Later on Six-One, Mr Norris has said all of the matters raised in the taped interview have been dealt with comprehensively.

He said he had nothing more to say on the subject and said the timing of its airing "is interesting".

Mr Norris said he got 30 minutes notice that the interview was to be broadcast today.

The Senator also defended the fact that he received a disability allowance from Trinity College while working as a senator.

He said voters faced a stark choice on polling day, and said people had been let down by politicians, bankers and others.

Earlier today Mr Norris had said he did not accept Seán Gallagher's claims to be an Independent candidate for the Presidency, on the basis of Mr Gallagher's recent links to Fianna Fáil.

Dana Rosemary Scallon has said she would not "rubberstamp" any legislation that undermined the peoples' rights as laid out in the constitution.

Also speaking on Six-One, Ms Scallon repeated that she thought about pulling out of the race earlier in the campaign when disputes among her family were reported.

But she said she decided to continue and said she did not want to give in to intimidation.

Ms Scallon also said that as President she would address a joint session of the Dáil and Seanad if needed.

Asked whether she would give a speech that contradicted Government policy, the former MEP said she would be an Independent President.

Michael D Higgins, Martin McGuinness and Gay Mitchell have ruled out any transfer pact with other Presidential candidates.

With less than a week to go before polling day, Mr Higgins said there were no talks of such arrangements at the moment.

Speaking on RTÉ's Morning Ireland, Mr Higgins said: "I'm running my own campaign and I think I'm doing quite well.

"Obviously I welcome, and I think I'll need, transfers from every other candidate."

Speaking on the same programme, Mr McGuinness said he did not believe any of the candidates had been prepared to go on the record regarding such a pact.

He said: "I think at this stage as we approach the election it would be very foolish for any candidate to express a preference for any other candidate."

Mr Mitchell also said there has been no discussion to date on a transfer pact between candidates.

He said every candidate will need transfers to be elected, but added he does not have a favourite one to transfer to at the moment.

Elsewhere, the other four candidates were also pushing for votes ahead of the final weekend of the campaign.

Mary Davis was in Mayo, Seán Gallagher was in Dublin, Wicklow and Wexford, while Ms Scallon was in Carlow and Tallaght. 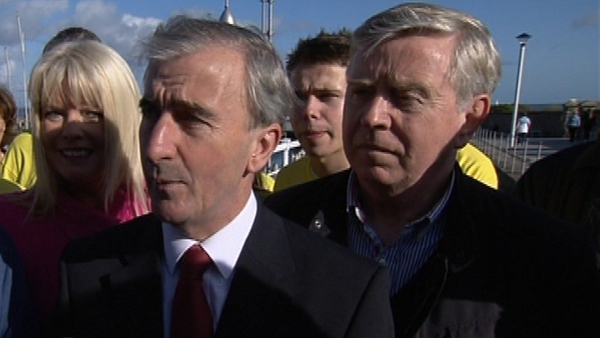