Libya's new leadership will formally proclaim the country's liberation on Sunday after the death of Muammar Gaddafi, while NATO has tentatively decided to end its mission over the country on 31 October.

However some observers suggested that the deposed dictator may have been summarily executed after his capture yesterday.

Russia, the UN's human rights chief, Amnesty International and Gaddafi's widow all called for a probe.

The US said the National Transitional Council should provide a "transparent account" of Gaddafi's death.

"The announcement of the liberation will be announced in Benghazi at 5pm (4pm Irish time) on Sunday, at the court of justice," said a senior NTC official, speaking on condition of anonymity.

Benghazi, Libya's second city, is where rebels first rose up against the Gaddafi's regime in February, and where the National Transitional Council, the country's new regime, is still based.

With the death of Gaddafi, his son Mutassim and other top regime figures, and the fall of his hometown Sirte, the promised declaration was widely expected.

It will be followed by the formation of an interim government to oversee drawing up a new constitution and free elections after four decades of dictatorship.

But with another Gaddafi son – long-time heir-apparent Seif al-Islam - still unaccounted for, NTC leaders have waited, despite jubilation in towns across the country at the news that the once all-powerful tyrant was dead.

Today Gaddafi's body was being held in a refrigerated chamber outside Misrata, an AFP correspondent reported, with the authorities wanting to run DNA tests before the burial.

NTC leaders were vague about the actual burial, not wishing to see the grave become a rallying point for residual loyalists.

Questions remain over how Gaddafi met his end after NTC fighters hauled him out of a culvert where he was hiding. Several videos show him still alive at that point.

Footage showed the former dictator, his face half-covered in blood, being dragged towards a vehicle by a delirious crowd and forced onto the bonnet.

Those at the front, pushed and shook him, pulled him by the hair and hit him. At one point he appeared to be trying to speak.

Subsequent footage showed him being hauled off the vehicle, still alive, and hustled through the screaming crowd, before he disappears in the crush and the crackle of gunfire can be heard.

NTC leaders are adamant he was shot in the head when he was caught "in crossfire" between his supporters and new regime fighters soon after his capture.

"There have been rumours flying around since the killing of Gaddafi, after images were released, claiming that our revolutionaries slaughtered him," a senior NTC official said.

"No instructions were given to kill Gaddafi, and we do not believe our revolutionaries intentionally killed him."

However in a video circulating on the Internet, a young fighter from Benghazi claims he shot Gaddafi twice after capturing him: once under the arm and once in the head.

He says he died a half hour later.

Russian Foreign Minister Sergei Lavrov said the "way his death happened poses an entire number of questions," and called for a probe.

"The images we saw on television show that he was taken prisoner while wounded, and then later, once already a prisoner, his life was taken away."

US State Department spokesman Mark Toner said the NTC "has already been working to determine the precise cause and circumstances of Gaddafi's death, and we obviously urge them to do so in an open and transparent manner as we move forward."

Toner repeated a US call to the NTC to treat prisoners humanely.

"On the issue of Gaddafi's death yesterday, the circumstances are still unclear," her spokesman Rupert Colville said. "There should be some kind of investigation given what we saw yesterday."

Claudio Cordone, senior director at Amnesty International, said that if Gaddafi "was killed after his capture, it would constitute a war crime and those responsible should be brought to justice."

He said the "NTC must apply the same standards to all, affording justice even to those who categorically denied it to others."

Gaddafi's widow, Safia, who fled to Algeria in August, also called on the UN to investigate the circumstances of her husband's death, Syria-based Arrai television said.

British Foreign Secretary William Hague said Britain did not approve of "extrajudicial killing" but would not mourn Gaddafi.

London holds him responsible for ordering the 1988 bombing of a US airliner over the Scottish town of Lockerbie as well as arming the IRA in its deadly campaign of bombings.

Paris and Washington revealed that their aircraft had intervened when a convoy, believed to be carrying Gaddafi, fled Sirte as NTC fighters overran the last redoubt of loyalist forces.

A US defence official said a Predator drone along with a French fighter jet had attacked a convoy that Paris believed was carrying the fallen dictator.

French Defence Minister Gerard Longuet said Libyan fighters then stepped in, destroying the vehicles, from which "they took out Colonel Gaddafi."

The air strikes marked the culmination of a NATO-led air war, which was operating on the strength of a UN mandate to protect civilians from Gaddafi's forces. The alliance said that operation would now wind down.

A formal decision to wind up the campaign would only be taken next week and in the meantime he would consult with both the UN and Libya's NTC, he added.

NATO would in the interim "monitor the situation and maintain the capacity to respond to threats to civilians if needed." 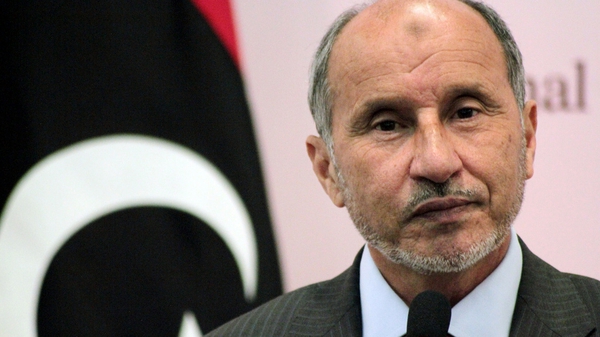 Gaddafi forces getting squeezed in Sirte