Independent Presidential candidate Mary Davis has said she accepts “collective responsibility” for decisions made in relation to mortgage lending while she was on the board of the ICS building society.

Speaking on Six-One, Ms Davis said if she had known then what she knows now, there would not have been 100% mortgages.

She said she has acted with integrity at all times.

Ms Davis said she found the negative campaign in relation to her time spent on boards “frustrating”.

Seán Gallagher has dismissed suggestions that he and Michael D Higgins should have a one-to-one debate.

Speaking in Galway this afternoon, Mr Gallagher said it would not be very inclusive to exclude the five other candidates.

He said there are seven candidates in the race and they had already has 12 or 13 debates and there was a need to honour and include all of them.

Norris says he is '24 carat' Independent

David Norris has said he is the "24 carat" Independent in the Presidential election.

Mr Norris said he was the only Independent candidate who had never been a member of a political party, been appointed to a State board, or had his campaigns backed by those with vested interests.

He said the people had to choose whether to give the Presidency to someone connected with the large parties, or to a true Independent.

There was a large media attendance for an announcement billed by his campaign team as "significant".

Senator Norris also made a statement about the Keane Report on mortgage debt, saying he never believed he would see evictions again in this country.

Dana Rosemary Scallon has indicated to TG4 that she will take part in tomorrow's debate.

She had indicated at the outset that she would not be able to take part because of a prior commitment.

Each candidate will make an opening and closing statement in Irish. In the main part of the debate, candidates can use English or Irish.

A Sinn Féin councillor in Waterford has said there is a hate campaign going on against Martin McGuinness "ike there was against African-Americans in Alabama in the 1960s.

Pat Fitzgerald said that after reading yesterday’s Sunday Independent, he believes Martin McGuinness, Sinn Féin members and supporters should be proud of themselves.

"We have forced the Indo into producing blatant black propaganda slating Martin McGuinness; not since the paper called for the execution/murder of James Connolly has been been such a hate campaign against an Irish republican leader.

“And RTÉ are just as bad with scurrilous attacks on the superb Presidential candidate," said Cllr Fitzgerald.

"With the rise of democracy, you can almost smell the dirty underwear between the lines," he added. 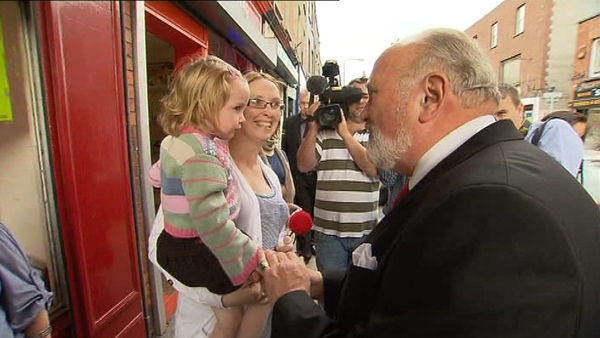 Norris seeks to 'move on' from clemency letter