Floods swamped an industrial estate in central Thailand and threatened a bigger one just outside the capital, Bangkok, which has so far escaped the worst despite heavy monsoon rain and water streaming towards it from the north.

Floods have killed 297 people since late July and caused $3 billion in damage.

A third of the country is under water but officials believe low-lying inner Bangkok will be spared after the strengthening of its system of defensive dikes and canals.

Ayutthaya, Pathum Thani and Nakhon Sawan provinces north of Bangkok have been devastated.

Floods have swallowed up homes and forced a series of huge industrial parks to close, including the Bang Pa-In estate in Ayutthaya on Saturday.

Another estate, Factory Land in Ayutthaya, which has 93 factories employing 8,500 employees, flooded in the early hours the morning.

Most of the factories there make car parts and electronic components, so this will add to the problems of the big international companies that use Thailand as a regional production hub.

Japanese car maker Honda Motor Co Ltd has shut its Ayutthaya plant, which accounts for 4.7% of its global output, and says it will stay closed until 21 October.

The authorities are increasingly worried about another industrial park, Nava Nakorn in Pathum Thani province north of Bangkok, which is standing in the way of the flow of water towards the capital.

Thai media reported that some 600 soldiers and workers from the estate, Thailand's oldest with more than 200 factories, were working around the clock to strengthen its walls and divert water.

The north, northeast and centre of Thailand have been worst hit by the flooding and Bangkok - much of it only two metres above sea level - is at risk as water overflows from reservoirs in the north, swelling the Chao Phraya river that winds through the densely populated and low-lying city.

The river was reported to be at a record high level of 2.15m at one point yesterday but the embankment wall running along it in inner Bangkok is at least 2.5m high and has been raised along vulnerable stretches.

Prime Minister Yingluck Shinawatra has sought to reassure residents they should be safe but people have still stocked up on bottled water, instant noodles, rice and canned goods, emptying shelves in some major markets.

Many have parked their cars in elevated garages and piled sandbags in front of shop-houses and homes.

Water from the north approached Bangkok over the weekend, coinciding with high estuary tides that hamper the flow of water into the sea. 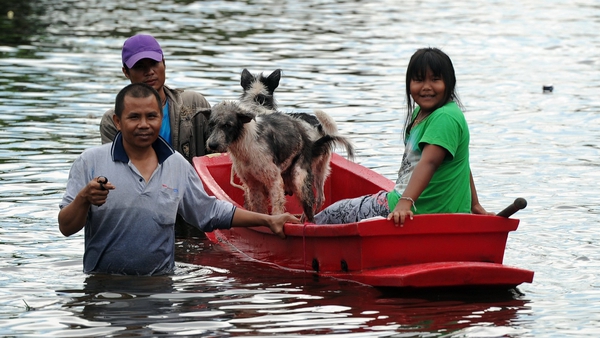