Independent Presidential candidate Seán Gallagher has moved to clarify information about his involvement with Fianna Fáil, after he confirmed he only formally resigned from the party's National Executive in January of this year.

On Monday, Mr Gallagher said he had left Fianna Fáil in 2009.

A spokesperson said Mr Gallagher had not attended any meetings of the Fianna Fáil National Executive since December 2009.

A statement issued this morning says that in September 2010, Mr Gallagher verbally indicated to Fianna Fáil HQ that he had would resign from the National Executive.

As the membership of the National Executive changes with each Árd Fhéis he intended to resign at this point.

It says that when it became apparent that no Árd Fhéis was imminent he confirmed in writing, with a formal letter of resignation, what had already been agreed in September 2010.

The statement says that Mr Gallagher joined the National Executive of Fianna Fáil in 2009 in a bid to advance his proposal for legislation to protect sub-contractors when developers went bust.

He attended two meetings of the executive in July 2009 and December 2009.

Dana has no regrets on entering Áras race

Presidential candidate Dana Rosemary Scallon said newspaper revelations about a dispute within her family over money, was a private and personal matter that had been worked through.

She said her dead mother would have been broken-hearted to see these details making headlines and it was the media looking for another story to write about.

Ms Scallon said she had no regrets about entering the race for President and the support she was receiving on the ground reinforced her belief that she would be a good ambassador for the people of Ireland if elected.

She said polls generally did not reflect the support she had and the only day that matters is voting day.

Ms Scallon was speaking in Galway City this morning.

Meanwhile, Martin McGuinness has welcomed the latest polls showing a rise in support for both him and the Sinn Féin party.

He said he was moving forward with confidence as one of the leading contenders for the office of President and that the announcement of his candidature had electrified the campaign.

Mr McGuinness said he was in this race to win and his plan of action was going well.

He said he was confident of picking up transfers judging from the support he was receiving on the ground.

Mr McGuinness campaigned in Galway City this morning before heading on to the Ballinasloe Horse Fair.

Davis looks to the future

Independent candidate Mary Davis said the question of exactly when Mr Gallagher left the Fianna Fáil party is a matter for him.

She said it is important that everyone in the campaign is truthful about their past.

Ms Davis said she wanted to be positive during the campaign and said the focus should be on the future.

She was speaking during a canvass in Sutton in Co Dublin.

Labour candidate Michael D Higgins has said he would not be drawn on the dispute among family members of Ms Scallon, saying he made a resolution that he would only talk about his own campaign for the rest of the contest.

Mr Higgins said he repeats his comments made yesterday that it must be distressing for Ms Scallon as it was a family matter.

He also said it is important that the rest of the campaign is conducted with the reminder that we are electing the President of the country and that there is a dignity that is associated with the office.

Mr Higgins was speaking in Dublin as he unveiled his new Irish language campaign poster.

Independent candidate David Norris has said he hopes the remaining 19 days of the campaign will focus on what he called the 'real issues'.

He said as far as he is concerned he has been 'scrutinised backwards' and said it is now time to get on with other topics.

He made his remarks while canvassing in Dundrum today. 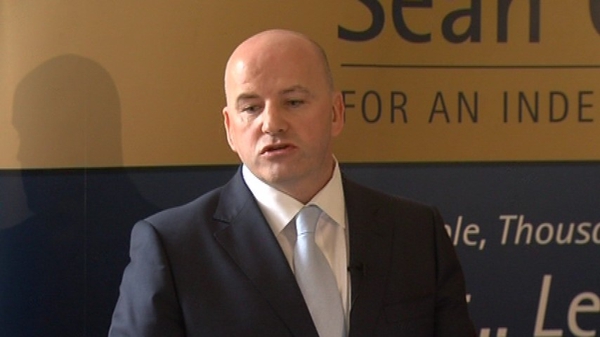