The push by National Transitional Council fighters squeezed Gaddafi's diehard loyalists into an ever tighter net in Sirte, correspondents on the ground said.

NTC chief Mustafa Abdel Jalil predicted "the battle for Sirte and Bani Walid will be very vicious," referring to the two holdouts of Libya's fallen leader.

Hassan Umran, in charge of the registry at a field hospital 50km west of Sirte, said 17 people were killed and 230 wounded in the fighting yesterday alone.

One was killed and 58 wounded today, he said.

Forces from Libya's interim regime scored a strategic goal, seizing a four-lane avenue that opens the way to a final assault on a key base of Gaddafi's troops.

But with thousands of civilians still trapped in the ex-leader's hometown, NTC commanders said they were pacing their advance to avoid losses from friendly fire.

Attacking from the east, NTC fighters seized the road to the Ouagadougou conference centre, a key base of pro-Gaddafi fighters still holding out after days of heavy pounding by NTC tank, cannon and rocket fire and ground assaults.

The advancing forces reached within between 500m and 1km of the centre and the nearby university, as Gaddafi loyalists responded with sporadic mortar and small arms fire, a correspondent said.

Naji Mismari, an NTC commander, said several Gaddafi loyalists were killed but without giving a number.

"Their corpses are still in the houses," he said, adding that 17 trapped families were rescued.

On the western front, fighting concentrated on the so-called 700-house complex where NTC forces fired RPGs and machineguns while Gaddafi loyalists used snipers and mortars.

"A sniper hit one of my men and the bullet went right through his head, killing him," said fighter Nabil Meftah. "Now the snipers are in the tall buildings further into the city."

After launching yesterday what they called a final assault on Sirte with a barrage of rocket and artillery fire, the NTC forces still faced stiff resistance by late today. 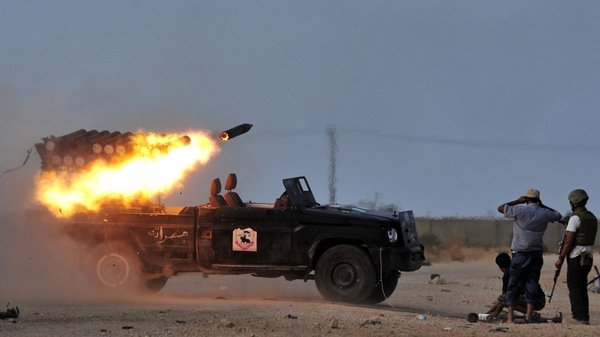