Dana Rosemary Scallon has denied claims made by her sister in a court case three years ago that her husband and her brother were involved in a decision not to tell the Irish public that Ms Scallon had become a US citizen prior to the 1997 Presidential election campaign.

Ms Scallon said her US citizenship, which involved her taking an oath renouncing allegiance to Ireland, was not an issue then or now and she had no reason to hide it.

She said she maintains her Irish nationality and was assured that she could take dual citizenship without any conflict to her Irish citizenship.

Speaking to RTÉ News while canvassing in Tralee, Co Kerry, this afternoon, Ms Scallon described the issue as a "distraction".

She said it was a "very low ebb" for the media to use what she described as a painful family dispute to paint her as someone who would deceive the Irish people.

She said she was not a deceptive person and had never lied.

Ms Scallon's sister, Susan Stein, told a court in Iowa in 2008 that a decision was taken in 1997 not to make the fact public - because she said "it wouldn't look very good if the people of Ireland knew she was an American citizen."

A report in today's Irish Times quotes Ms Scallon as saying she could not recall taking the oath.

The article points out that people becoming naturalised US citizens take an oath renouncing their allegiance to all other states.

Elsewhere, Martin McGuinness said the positive showings for Sinn Féin and himself in the latest polls reflected the positive reception he was receiving on the ground.

Mr McGuinness said he had delivered more than any of the other candidates in terms of international negotiations on the peace process and job creation.

He said he would apply these same skills to the whole of the 32 counties of Ireland if he were elected President, uniting the people of Ireland against the greed and selfishness against big salaries and pensions and bonuses against the backdrop of mass unemployment.

He was speaking in Charlestown, Co Mayo, before heading on to Castlebar this lunchtime and then over to Galway in the afternoon.

Meanwhile, reacting to suggestions that party insiders believe his campaign is doomed, Gay Mitchell said he does not believe anyone in Fine Gael is saying this and he does not know why these stories are surfacing.

"I presume it's because in the Presidency they are always looking for stories and controversy and if this is the only controversy they have then I think it shows I really am the best candidate for President," he said.

Mr Mitchell said he is as convinced as ever that he is going to win this election.

'This is going to crank up the organisation, get their tails up,' he said.

He said that if you can go down 11% in the polls you can go up 11% and the one thing about the vote is that it is volatile.

Mr Mitchell was speaking in Collooney, Co Sligo where he was met by a group of people campaigning for the restoration of breast cancer services to Sligo General Hospital.

They chanted "no votes for turncoats" as he went into Ocean FM's radio studio where Mr Mitchell met three of the protesters and accepted a letter from them on the issue. 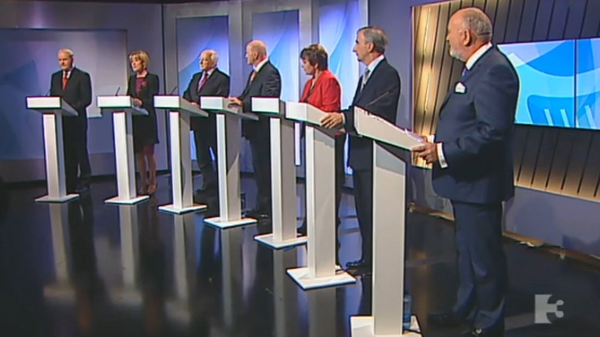