Afghanistan has marked ten years since the start of the US-led war against the Taliban, with security tight after a string of insurgent attacks that have diminished hopes for an enduring peace.

A former American commander of the coalition forces has said the US lacks the knowledge to bring the conflict to an end.

Retired US General Stanley McChrystal said the forces were barely over half-way towards reaching their goals under "Operation Enduring Freedom", which aims to eliminate the Taliban.

The United Nations estimates that more than 10,000 Afghan civilians and 2,500 international troops have died in the fighting in the past five years alone.

On the frontlines, it is likely to be business as usual for the 140,000 international troops in Afghanistan, including 100,000 from the US, as they continue to battle the Taliban-led insurgency.

For many Afghans, the anniversary will be a time for reflection on what the war has meant for their country and the implications of the withdrawal of all foreign combat troops by the end of 2014.

"I spent a year in the city of Kabul during the Taliban regime and they made life difficult as they banned everything. We were forced to flee the country and live in Pakistan," said Abdul Saboor, a 30-year-old cook in Kabul.

"I was very pleased when finally the dark era of the Taliban ended in our country."

But the anniversary will also heighten discontent over the long conflict that has left Afghanistan with a corrupt government, a widely criticised Western troop presence and only dim prospects for peace.

"Since the Americans and their allies came to Afghanistan, our security has deteriorated and they have also been involved in the killings of innocent Afghan civilians," he said.

Security is being stepped up in the capital after a string of major attacks including the assassination of peace envoy Burhanuddin Rabbani, which has thrown government strategy for talking peace with the Taliban into turmoil.

"There will be more security, more checks. Police will be on high alert," a senior Afghan government official told AFP.

"There will be some preparations like more security and more checks."

Around 200 Afghans called for the withdrawal of foreign troops and shouted anti-American slogans at a protest in Kabul on the eve of the anniversary.

They shouted "Death to America and its Afghan puppets" and torched a US flag at the end of their march through the city centre, an AFP reporter at the scene said.

The war was launched to oust the Taliban for harbouring al-Qaeda leader Osama bin Laden who plotted the 11 September 2001 attacks on the US, and destroy al-Qaeda training camps in Afghanistan.

On 7 October, 2001, just under a month after the 11 September strikes, US planes dropped dozens of cruise missiles and laser-guided bombs on strategic targets in Kabul and other Afghan cities.

That was followed by a ground campaign which defeated the Taliban within weeks. 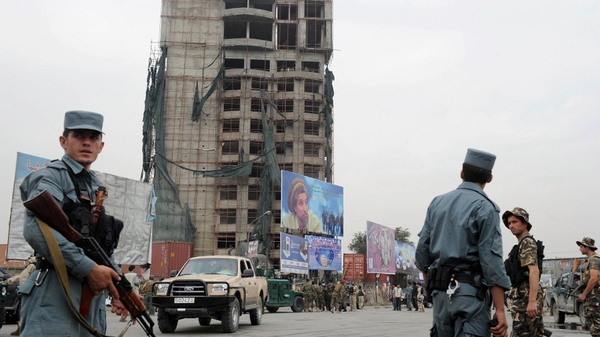