The Greek government has announced additional austerity measures as it seeks to plug a budget gap and unlock rescue funding from the EU and IMF needed to avoid a default.

Pensions above €1,200 a month will be cut by 20%, 30,000 state employees will be temporarily laid off and the revenue exemption on annual taxes will be reduced to €5,000, the government said in a statement.

Sources also said the government will also extend a new property tax hike originally slated to expire next year until at least 2014.

It will also put 30,000 civil servants in "labour reserve" this year, the official said, which means it will reduce their pay to 60% of their salaries and give them 12 months to find new work in the state sector or lose their jobs.

Greece has been struggling to convince the European Union and International Monetary Fund that it can bring its tough economic overhaul programme back onto track despite delays and targets slipping due a deeper-than-expected recession.

Earlier, Taoiseach Enda Kenny said it is perfectly in order for the leaders of France and Germany to meet on the crisis in the eurozone.

Speaking in the Dáil, Mr Kenny said both countries were enormously influential in Europe and that Germany, in particular, sets the base rate on interest.

He was responding to Independent TD Shane Ross, who asked the Taoiseach if it was satisfactory that French president Nicolas Sarkozy and German Chancellor Angela Merkel were posing as spokespersons for Europe while France was in the same 'swamp' economically as we were.

He said we must question handing over Ireland's sovereignty to others in a possibly worse situation than Ireland.

He was speaking in the context of the IMF report that expressed concerns about the eurozone economy.

The Dáil was debating the European Financial Stability Facility Bill, which is the result of an EU agreement responding to the financial crisis.

It sets up the structures that provide financial assistance to member states in economic difficulty.

Earlier, Greek Finance Minister Angelos Venizelos vowed that the country would stay in the eurozone forever.

"Greece is and will forever be a member of the eurozone," Mr Venizelos told parliament today. 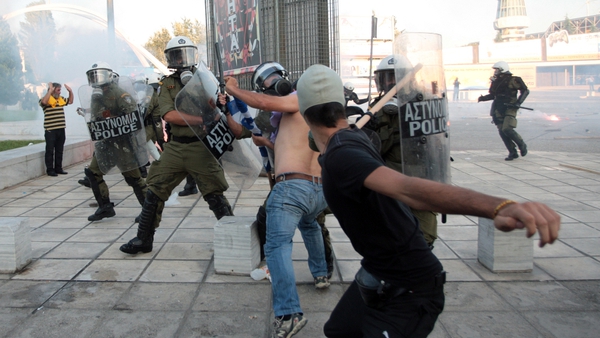