Taoiseach Enda Kenny has said that anything less than full co-operation from the Vatican with the workings of the Murphy Commission into clerical child abuse in the diocese of Cloyne constituted unwarranted interference in the operation of the inquiry.

He was responding to questions on the Vatican's response to his criticism of its handling of abuse allegations.

Speaking at the opening of a special Fine Gael parliamentary party meeting in Galway, Mr Kenny said that when he spoke on the issue in the Dáil in July, he was trying to reflect the anger and frustration of the Irish people.

He said the Murphy Commission had made several requests for information to the Vatican, which were refused or rejected.

The Taoiseach also said there was nothing the Coalition Government could do to alter the almost €600,000 retirement package paid to former Government Secretary General Dermot McCarthy.

He said there would be changes in the future to pension arrangements for senior civil servants and that these would be set out by the Government in due course.

Mr Kenny said the changes would reflect the Government's attitude towards "this kind of situation".

The Taoiseach also dismissed suggestions that there was a strain in relations between Labour and Fine Gael Ministers in Cabinet.

Mr Kenny said Tánaiste Eamon Gilmore plays a full, constructive part in the process of decision making that the Government is involved in.

The party's 'think-in' is expected to be dominated by the economy and jobs.

Earlier, students demonstrated outside the hotel where the Fine Gael meeting is taking place.

Two students tied themselves together through a plastic pipe. A large number of gardaí were at the scene.

The Fine Gael meeting is the latest in a series of political gatherings before the opening of the Dáil term next week.

The Labour party convened for a second day for its pre-Dáil meeting in Co Carlow.

In Carlow, Tánaiste Eamon Gilmore said he understands public anger at the size of the retirement package paid to Mr McCarthy.

Speaking at the conclusion of the meeting in Tullow, Mr Gilmore said that was why the Government is moving to stop such large payments in future.

Asked if Mr McCarthy should return some of the money, Mr Gilmore said it was up to individuals to decide what to do in such circumstances.

Mr Gilmore also welcomed a new report which he said indicated that Ireland could come out of recession more quickly than previously estimated, but he said it did not mean tough budgetary measures could be avoided.

Labour discussed strategy on natural resources, the Presidential election, as well as possible changes to the Constitution as a result of the planned constitutional convention.

Mr Higgins said the rules requiring candidates to be nominated by 20 Oireachtas members or four local authorities should be looked at by the constitutional convention, which is due to be set up next year.

Mr Higgins said that if elected, he would participate in the work of the convention.

He also criticised the minimum age of 35 for Presidential candidates, saying he was opposed to ageism at either end of the spectrum. 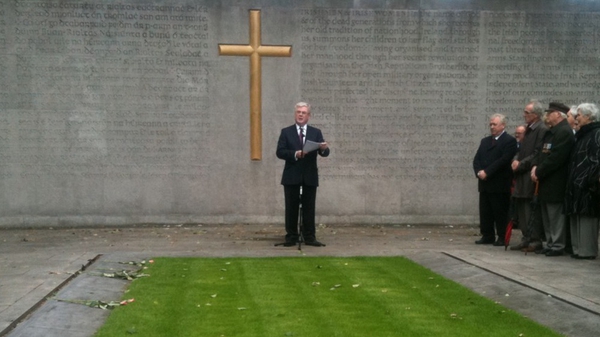