Muammar Gaddafi's wife and three of his children have crossed the border from Libya in to Algeria, Algeria's foreign ministry said.

Their arrival was reported to the UN and the Libyan rebel authorities, the state Algeria Press Service (APS) reported, citing the ministry.

'Muammar Gaddafi's wife Safia, his daughter Aisha, his sons Hannibal and Mohammed, accompanied by their children, entered Algeria at 8.45am through the Algerian-Libyan border', said APS.

Libyan rebel officials have previously accused Algeria of backing Gaddafi in the war, an allegation Algeria has denied.

Algeria is the only one of Libya's north African neighbours that has yet to recognise the National Transitional Council, after Gaddafi's compound in Tripoli was overrun by rebels.

Meanwhile, a senior rebel officer has said that Gaddafi's son Khamis has been killed in a clash near the capital Tripoli.

Colonel Al-Mahdi Al-Haragi, in charge of the Tripoli Brigade of the rebels, said he had confirmation that Khamis was badly wounded in the clash near Ben Walid and Tarhoni.

He was taken to a hospital but died of his wounds and was buried in the area, Col Al-Haragi said.

However, there has been no independent confirmation of the death.

Elsewhere, rebels are moving towards Gaddafi's hometown of Sirte, hoping to seal their revolution by seizing the last stronghold of the fugitive leader.

Gaddafi's whereabouts have been unknown since Tripoli fell to the rebels and his 42-year-old rule collapsed a week ago.

Residents in the capital, hit by shortages of food, fuel and water, ventured out to shop ahead of the Eid al-Fitr festival after the Muslim fasting month of Ramadan.

Gunfire echoed occasionally across Tripoli as residents picked up their lives amid the stink of burning rubbish and aid agencies reported a revival of medical and other services.

Gaddafi strongholds in Sirte and some towns deep in the southern desert remain a challenge for Libya's new rulers, who have vowed to take them by force, if negotiations fail.

Mustafa Abdel Jalil, chairman of the NTC, asked NATO to pursue its five-month-old air campaign, which has given essential firepower to rebels who rose against Gaddafi in February.

Mr Abdel Jalil was speaking at a meeting of defence ministers from countries that have supported the anti-Gaddafi movement.

A NATO commander pledged to pursue the alliance's mission, at least until its internal mandate expires on 27 September.

NATO warplanes struck at Sirte, on the Mediterranean coast, for a third day yesterday, a NATO spokesman said in Brussels.

Around 40,000 prisoners of Gaddafi's regime are currently unaccounted for, according to a Libyan rebel spokesman.

Colonel Ahmed Bani said it was possible that some were being held in underground bunkers in Tripoli, but that rebels have so far been unable to locate them.

However, there is also concern that many may have been killed before rebels gained control of the Libyan capital.

Sarah Leah Whitson of Human Rights Watch said the evidence gathered by them 'strongly suggests that Gaddafi government forces went on a spate of arbitrary killing as Tripoli was falling.'

The NTC has offered a €1m reward and amnesty from prosecution for anyone who kills or captures Gaddafi. 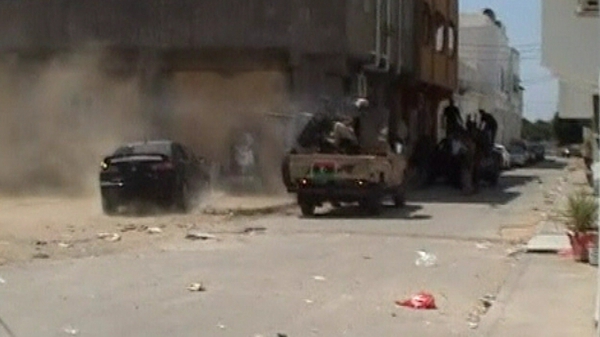 Hunt for Gaddafi continues in Tripoli