The Rambler 100 yacht, which capsized off the Fastnet Rock last night, will be assessed for damage by a team of divers tomorrow morning.

The stricken vessel has been towed to a sheltered bay near Brow Head where it will stay overnight.

Following tomorrow's inspection a decision will be taken on where the US registered, Rambler 100 will be taken.

Mandy Touton, the yachtswoman who was airlifted to hospital, has now been discharged as all 21 crew members begin to make plans to head home.

Weather conditions are expected to be better tomorrow.

Gerry Smith, skipper of the Wave Chieftain who rescued five of the crew from the sea last night, including skipper David George, said salvaging such a huge vessel will be a tough operation.

'It will have to be put into a position were you get up and remove the rigging and get it ready for moving,' he said.

'You have a 40ft mast and with all the associated rigging. It will be tomorrow before it will be brought in.'

Mr Smith took out Mr David and a dive team to inspect the wreckage and attempt to recover passports and some other personal items from the cabin.

Five crew had been in the waters for three hours before being rescued by the crew of a private vessel.

The remaining 16 sought refuge on the hull and were brought to safety by the emergency services.

The Rambler 100, a multi-million euro racing yacht, had been taking part in the Fastnet race when it overturned after its keel cracked. The yacht overturned in less than 15 seconds.

The rescue operation was launched after an emergency satellite warning system was activated.

Mr David, said the stainless steel keel fin had fractured, but the cause was as yet unknown.

Speaking on RTE’s Morning Ireland, Mr Williams said he heard a big bang before the vessel began to capsize.

He said a number of the crew were below deck at the time and were lucky to have escaped.

He described the experience as very scary but was greatly relieved that everyone had been rescued safely.

The Irish Navy has said good luck played a role in the successful rescue operation.

Lt Commander Frank O'Connor, of the LE Ciara, said because of fog, wind and a swell, it had been very difficult for the RNLI and a local boat to locate the upturned yacht and the crew members.

The Minister for the Marine, Simon Coveney, has commended the rescue services for their work last night.

‘This was a dramatic sea rescue that was co-ordinated with speed and professionalism and everybody involved should be commended for their efforts,’ a statement from the minister said.

‘This is a reminder of just how important it is for Ireland to have a well resourced sea rescue infrastructure.’

He added: ‘The Fastnet race is one of the most high-profile offshore yacht races in the world and Rambler 100 is one of the best known racing yachts on the planet.

‘This incident will be reported in the international press and we can be proud of the way in which Irish emergency services contributed to preventing any loss of life.’ 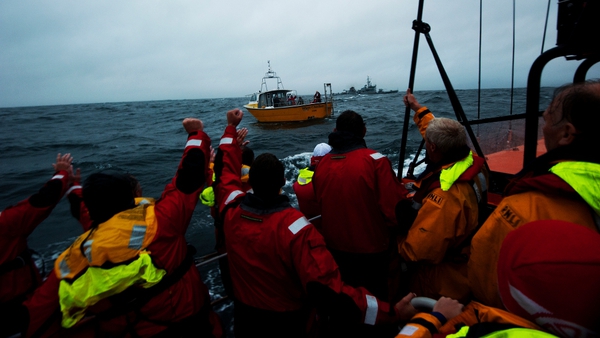