Protesters have said they will refuse to allow Roscommon County Hospital's 24-hour emergency facility to close its doors at 8pm.

The urgent care centre at the hospital, which replaced the former emergency department last month, has ceased offering a seven-day-a-week, 24-hour service.

From 8am today, the centre will treat patients with non-emergency conditions until 8pm, seven days a week.

In emergency cases, patients will be taken to other hospitals in the region for treatment.

Over 100 protesters staged a sit-in at the Urgent Care Centre of Roscommon county Hospital.

A crowd of more than 500 people had also gathered outside the hospital.

The Roscommon Hospital Action Committee has called on the HSE to defer this evening's scheduled changes until an independent report on the safety of the facility commissioned by Minister for Health Dr James Reilly is published.

HSE spokesperson councillor Valerie Byrne said the minister had agreed that this independent review be carried out and it would be unfair on the people of Roscommon to have the overnight care facilities curtailed before the report was made public.

The Hospital Action Committee have said they are going ahead with a protest at the hospital at 8pm but have emphasised that it will be a peaceful one and will take place outside the building.

Incidents in the last few days, he said, have once again underlined their deep dissatisfaction with the arrangements that have been put in place.

The HAC claims that there was no ambulance service available in Roscommon town last night between 10pm and 10.30pm when a man collapsed on Goff Street.

It claims efforts were made to bring an ambulance from the midland region based in Athlone, they also claim that patients had been transferred to hospitals outside the region in the last two weeks because there was no facilities available at Galway, Sligo, Castlebar or Portiuncula.

Fine Gael TD Denis Naughten lost the party whip and resigned as chairman of the Joint Oireachtas Committee on Health, Children & Youth Affairs, after he failed to support the Government in a Dáil vote on the downgrading of the unit. 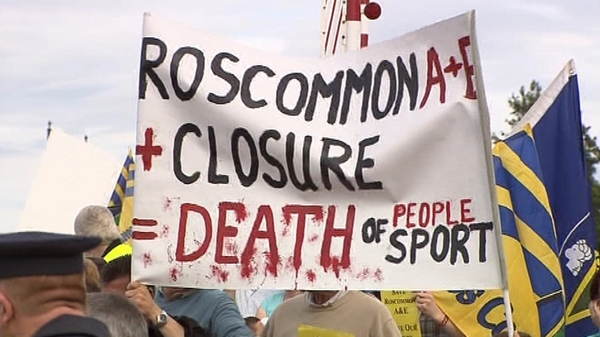