Senator David Norris has withdrawn from the Presidential race.

At a news conference outside his home in Dublin this afternoon, Mr Norris said he deeply regretted the controversy concerning his former partner Ezra Nawi.

'The fallout from his disgraceful behaviour has now spread to me and is in danger of contaminating others close to me, both in political and personal life. It is essential that I act decisively now to halt this negative process.'

It emerged on Saturday, that Mr Norris wrote a letter on Seanad notepaper to an Israeli court in 1997 pleading clemency for his former partner, who had been found guilty of the statutory rape of a 15-year-old boy.

He said he did not regret supporting and seeking clemency for a friend, but said he did regret giving the impression that he did not have sufficient compassion for the victim.

The Senator said he now accepts he was wrong, but said his motivation to write the letter was out of love and concern.

Speaking about the Presidential campaign, Mr Norris said it had been 'a most wonderful experience' despite the trauma and energy expended.

'I have been involved in many campaigns and have written many hundreds of letters on behalf of people in every continent - persecuted Tibetan monks, East Timorese, death row prisoners in the United States of America.

'So it is very sad that in trying to help a person I loved dearly, I made a human error.'

While welcoming the fact that it was now possible for a gay person to be seen as a viable presidential candidate, Mr Norris did criticise the current presidential nomination procedures.

'This process has thrown up issues that make it clear that the whole question of the way in which candidates are nominated must be examined urgently by the government, a commitment given by all the parties in 1998 but never acted upon.'

He said he believed he had fought his campaign with the dignity and decorum that would be rightly expected of any Presidential candidate.

'The Presidency of Ireland belongs to the people and not any party or sectional interest.'

In a statement this evening, Presidential candidate Michael D Higgins said he wished to pay tribute to the grace of Mr Norris' statement today.

He said it was his hope that the next weeks would 'bring a concentration on the core issues'.

Meanwhile, candidate Seán Gallagher acknowledged the work Mr Norris has done 'campaigning for many important issues throughout the years'.

In a statement, released today, the Israeli embassy said: 'allegations made in the media by some Irish public figures that the Embassy was involved in the publication of a letter written by Senator David Norris to a court in Israel have absolutely no foundation'.

The statement added that successive Israeli ambassadors to Ireland have enjoyed a 'friendly, if combative and mutually critical, relationship' with Mr Norris over the years, and that there is much admiration in Israel for his work on human rights and reform of laws relating to homosexuality. 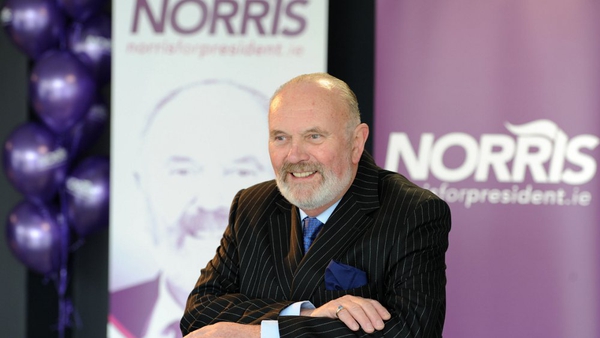