Norwegian media have said that Anders Behring Breivik had planned more attacks than the bombing and shooting spree that killed 77 people.

Norwegian media reported that right-wing extremist Breivik, who has claimed responsibility for the attacks, had also planned assaults on the royal palace and the headquarters of the ruling Labour Party.

Although it is still not clear whether he acted alone or was working with other 'cells', as he claimed following his arrest, police seem to be favouring the first scenario.

Oslo district police's attorney Paal-Fredrik Hjort Kraby was asked if Breivik had said anything to investigators about his plans going wrong.

Mr Breivik had been saving money for some time to be able to fund his actions, Mr Hjort Kraby added.

The self-confessed killer, who has admitted responsibility but declined to enter a guilty plea, had fully cooperated with police investigations so far.

According to the Verdens Gang tabloid, the royal palace was a possible target because of its symbolic value.

The Labour Party headquarters were another potential target, the paper said, because of the party's role in creating the multi-cultural society Breivik loathed so much.

The tabloid, which did not reveal its source, also said investigators believed Breivik had had trouble making explosives beyond those that killed eight people in the Oslo blast, which targeted government offices.

Another 69 people, mainly young, were killed in the shooting spree at the summer camp on the island of Utoeya held by the Labour Party's youth wing.

A day after the first victims of the attacks were buried, Norwegians scattered roses in tribute to the country's emergency services who took the strain in the aftermath of the carnage.

Oslo Cathedral hosted a special service in tribute to the police, ambulance drivers, first aiders and firemen - but also to the politicians who gave voice to the nation's shock and grief in the days following the attacks.

Breivik, 32, believed he was engaged in a struggle to defend Europe against an Islamic invasion and despised anyone who believed in democracy, his lawyer, Geir Lippestad, has told the media.

Mr Lippestad also told a newspaper on Friday that his client had planned to attack other targets.

In a report published late last night, Norway's police intelligence unit concluded there was no cause to raise the threat level in the country, given the 'unique' nature of the 22 July attacks.

Psychiatrists are now assessing whether Breivik is legally insane, as prosecutors seek to bring him to trial next year and are expected to report back by 1 November. 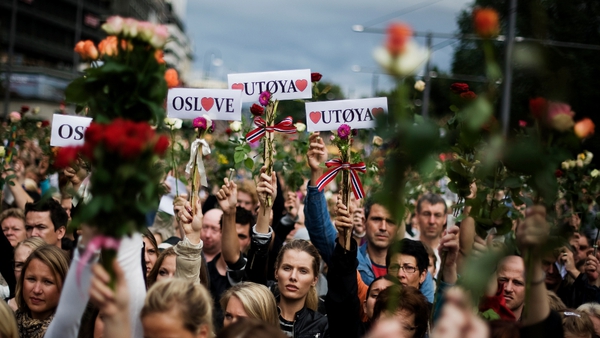