The head of the International Monetary Fund, Christine Lagarde, has urged politicians in the United States to strike a deal on the country's level of debt.

Republicans and Democrats have blamed each other over the failure to end the ongoing row about raising the debt limit.

Ms Legarde said it would be very serious to have a US default.

‘The clock is really ticking. And people have to really find the appropriate solution,’ she said of the deadlocked talks on raising the US debt ceiling by the 2 August deadline.

‘Default would be terrible for the United States and for the economy at large,’ Ms Lagarde said.

She called on the US to develop a credible fiscal adjustment plan to address its public debt but cautioned that near-term budget cuts could undercut an already sluggish economy.

Americans are overwhelmingly concerned about the US debt crisis and a majority back the type of compromise pushed by President Barack Obama, a new Reuters/Ipsos poll has found.

Showing an intensity of interest among Americans who often ignore the intricacies of policy in Washington, 83% of those polled said they were either very or somewhat concerned about the looming deadline for Congress to raise the ceiling on America's borrowing or have the nation run out of money to pay all its bills by 2 August.

The poll found 56% of Americans want to see a combination of government spending cuts and tax increases to bring down the US budget deficit and permit a vote to raise the country's $14.3 trillion debt ceiling.

That is the approach proposed by Mr Obama. Congressional Republicans oppose any tax increases.

Meanwhile, the US government has threatened that President Obama would veto a current Republican two-step plan to resolve the US debt crisis if it is passed by US lawmakers.

The Office of Management and Budget said the US administration ‘strongly opposes’ the plan and if it is presented to Mr Obama ‘the president's senior advisors would recommend that he veto this bill’.

He said they were insisting on steep budget cuts as the price for raising the debt limit, while allowing wealthy Americans to make no contribution.

He called on divided congressional leaders to compromise and break a deadlock over raising the US debt limit that he said risked a 'reckless' national default.

The US president made the appeal in an address to the nation.

A clearly frustrated Mr Obama addressed the American people as the deadline looms for the US to reach agreement.

Even if default is avoided, as most expect, the impasse has raised fears of an unprecedented downgrade of America's gold-plated credit rating.

As the clock ticks toward the deadline, the stalemate is rattling investors worldwide, sending stocks and the dollar down and pushing gold to a record high.

But market reaction so far has fallen short of the panicky sell-off some politicians had feared after weekend talks broke down.

In his address, Mr Obama spelled out the severe economic consequences of a default or a credit ratings downgrade.

‘Defaulting on our obligations is a reckless and irresponsible outcome to this debate. ... We would risk sparking a deep economic crisis - one caused almost entirely by Washington,’ Mr Obama said.

He urged a compromise to reduce the deficit by $4 trillion and share the burden of cuts evenly across society.

‘I have told leaders of both parties that they must come up with a fair compromise in the next few days that can pass both houses of Congress - a compromise I can sign,’ he said.

‘And I am confident we can reach this compromise.'

He said there was a clear way forward which would see the Congress raise the legal debt limit while the budget deficit would be tackled by spending cuts and tax rises.

But republicans rejected this approach. Speaker of the House John Boehner said there was no chance of tax increases.

‘The sad truth is that the president wanted a blank cheque six months ago and he wants a blank cheque today. That is just not going to happen,’ Mr Boehner said.

He said the real problem is government spending, which has to be drastically cut. 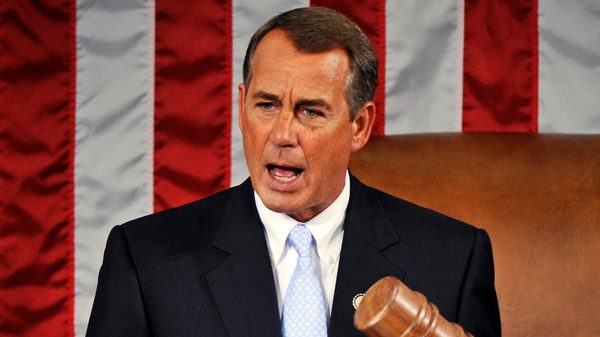