Norwegians have been holding mass rallies across the country to remember the victims of Friday's bomb and shooting attacks.

Police say the death toll from the Utoeya shootings has been revised down from 86 to 68, while the number of those killed in the Oslo bomb now stands at eight.

This means that a total of 76 people are now confirmed to have died in the attacks on Friday.

At a news conference this afternoon, police attributed the initial incorrect death toll in Utoeya to the 'difficult situation' on the island.

Anders Behring Breivik, the 32-year-old Norwegian who has admitted carrying out the attacks, was remanded in custody for at least eight weeks this afternoon.

For four of those weeks he will be held in complete isolation.

Judge Kim Heger said that Mr Breivik would be locked up alone with no incoming letters, media nor visitors except for his lawyer.

A trial could be a year away.

Anders Behring Breivik has admitted the facts of the case, but did 'not plead guilty,' Ms Heger said after the closed-door hearing.

The presiding judge at Mr Breivik's hearing said police would investigate a claim by Mr Breivik that there are 'two more cells in our organisation.'

He had previously said he acted alone in the attacks.

Mr Breivik was refused permission to appear in court dressed in uniform, the judge said.

The hearing was closed to the media.

The vehicle bringing Mr Breivik into the courthouse arrived and left through a back entrance to the court building. People waiting to catch a glimpse of him cried 'traitor' and 'bloody killer' as he passed.

Mr Breivik's lawyer, Geir Lippestad, came in through the main entrance, having to force a passage through hundreds of journalists waiting since early morning.

Mr Breivik, who sought to portray himself as crusader against a tide of immigration in Europe, had said through his lawyer that he wanted to explain the motives for his actions at the hearing.

Mr Lippestad said his client had admitted to Friday's shootings at a Labour youth camp and an earlier bomb in Oslo's government district but that he denies any criminal guilt.

‘He has been politically active and found out himself that he did not succeed with usual political tools and so resorted to violence,’ Mr Lippestad told TV2 news.

‘I await a medical assessment of him,’ he said.

Police have said the gunman had said during interrogation that he was prepared to spend the rest of his life in prison.

The worst peacetime massacre in Norway's modern history appears to have been driven by Mr Breivik's mission to save Europe from what he saw as the threats of Islam, immigration and multiculturalism.

At around 11am this morning (Irish time), Norway observed a minute's silence.

Thousands of people bowed their heads in silence outside Oslo's main university at a ceremony led by Norway's Prime Minister Jens Stoltenberg and King Harald V who then signed a book of condolences inside.

'To remember the victims who died at the government's headquarters and on the island of Utoeya, I declare a minute of silence,' Mr Stotenberg said.

It has emerged that Mr Breivik was investigated in March for a purchase of chemicals, but the probe was dropped.

He came to police's attention because of a purchase from a Polish business selling chemicals, but the incident was judged too insignificant to warrant a follow-up, Norwegian Police Security Service head Janne Kristiansen said.

‘In March, we received ... a list of 50-60 names and his name was on it because he spent 120 krone (€15 or $22) at a business in Poland,’ the head of the PST, which reports directly to the ministry of justice, told Norway's public television channel NRK.

‘This business was under surveillance because it was selling other chemical products.’

The PST receives ‘a lot of intelligence’ on ‘a lot of people,’ she said.

‘We don't have the right to put people's names on the register just like that but we checked if we had anything on these people, if any of them could be connected to any other intelligence we had but we had absolutely nothing on Behring Breivik.

‘He lived a life that was incredibly respectful of the law,’ she said.

More than 100,000 people, many carrying white or red roses, rallied in Oslo to show support for victims of attacks Friday's attacks.

'Tonight the streets are filled with love,' Crown Prince Haakon told the crowd, gathered to mark oppostion to the attacks.

Rallies were also held in other cities around the country.

Gunman should have killed himself - father

Anders Behring Breivik should have committed suicide instead of killing 76 people, his estranged father told TV2 in an interview shown today.

‘I think that ultimately he should have taken his own life rather than kill so many people,’ Jens Breivik said in the interview recorded in Cournanel in the south of France where the retired diplomat lives.

Jens Breivik said he had not had any contact with his son for 15 years.

‘I will never have any more contact with him,’ Jens Breivik said.

He was filmed from behind so as to conceal his identity during the interview on a sunny terrace, with French police standing in the background.

Mr Breivik said he agreed that they were strong words to sayabout one's son.

‘But when I think of what happened, I'm filled with despair. I still don't understand how something like this could happen. No-one normal could do that.’

A book of condolence for the victim's of Friday's attacks has been opened at the Norwegian Embassy in Dublin.

Minister for Justice Alan Shatter visited the embassy this afternoon to sign the book.

It will be available for signing tomorrow from midday until 2pm at the embassy on Molesworth Street.

There will also be books of condolence opened in Dublin's Mansion House and at City Hall on Dame Street. The books will available for signing between 10am and 4pm from tomorrow until Saturday.

Books of condolence will also be opened during office hours at Limerick County Hall and at Cork City Hall. 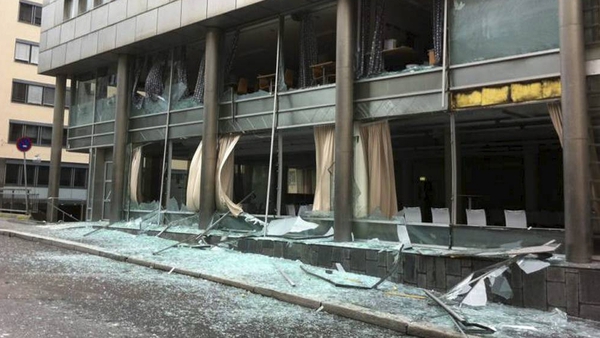