The White House has expressed confidence that a damaging debt default would be averted, but warring US lawmakers appeared no closer to a deal to rein in the United States's budget deficit.

President Barack Obama has urged rival Democrats and Republicans to strike a 'grand bargain' to reduce the yawning deficit by some $4 trillion (€2.3 trillion) over ten years, in tandem with allowing the crucial increase to the borrowing limit.

But with the US Congress divided between the Republican-controlled House of Representatives and the Democrat-held Senate, he is struggling to straddle a sharp ideological divide over taxation and the size of government.

The president says he will only cut Medicare and Social Security if Republican opponents agree to sacrifices too, like tax rises for the wealthy.

The House of Representatives is due to vote next week on a 'cut, cap and balance' plan favoured by Republican lawmakers close to the ultra-conservative tea party movement, but it is seen as having no chance of passing the Senate.

Economists and business leaders have warned failure to raise the US debt ceiling by 2 August could send shock waves through a world economy still reeling from the 2008 financial collapse.

The White House seemed sure that the debt default would not happen but offered few clues on the endgame in a long budget impasse that has seen Obama host days of crisis talks.

Behind the scenes, a back-up plan has been taking shape. Rival Senate leaders, Mitch McConnell of the Republicans and Harry Reid of the Democrats, are reportedly looking to form a powerful debt reduction committee.

The increase in the debt ceiling would be achieved by a complex legislative procedure in which three tranches, totaling $2.5 trillion (€1.7 trillion), would be approved over the next year without any Republican backing.

A bipartisan congressional committee would then be charged with coming up with a debt reduction plan by the end of the year.

The White House budget director insisted Mr Obama was still seeking a debt reduction deal right away, but he also confirmed the basics of the McConnell-Reid back-up plan and did not dismiss it.

The budget showdown is enmeshed in America's perpetual election cycle as Republicans seek to block Obama's agenda, painting him as a big-spending liberal who would lead the US to economic ruin if reelected in 2012.

But Republicans have to walk a fine line on the debt issue as they are also aware that any cynical politicking seen as hurting the fragile US economic recovery would be electoral suicide.

The US government reached its debt limit of $14.29 trillion (€10.2 trillion) in May and since then the Treasury Department has used special measures to allow the government to keep paying its bills. 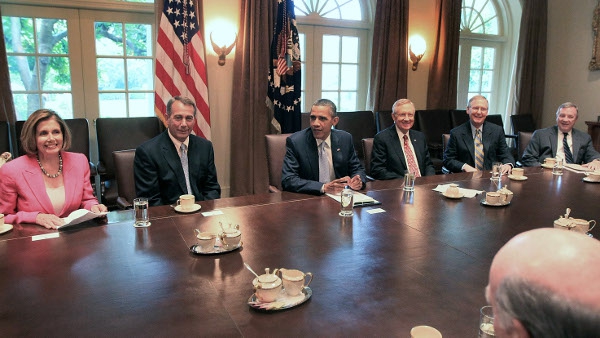 Moody's may cut US debt rating