Ireland is on track and meeting its targets as part of the European Union/International Monetary Fund bailout, the European Commission, ECB and IMF have told the Government.

At the end of its third quarterly programme review mission, the Troika has 'assessed the programme to be on track and in their view all targets in the programme to date have been met', according to a statement from the Department of Finance.

Deputy Director of the IMF's European Department Ajai Chopra said the IMF welcomed the statement earlier this week from eurozone ministers, who said they were ready to take further measures, including extending the flexibility and scope of the European rescue mechanism, to deal with Europe's debt crisis.

Mr Chopra said the IMF looked forward to the 'prompt implementation' of these measures, adding that what was needed was a European solution to a European problem.

At a previous press conference in Dublin, Mr Chopra had described the EU/IMF programme as 'an Irish solution to an Irish problem'.

Klaus Masuch of the European Central Bank told reporters the bank's opposition to imposing losses on senior bank bondholders had not changed.

Minister for Finance Michael Noonan said: 'I am pleased that the mission has concluded that Ireland is meeting all of the conditions and targets of our programme.

Mr Noonan said he was especially pleased that financial sector reforms had occurred ahead of schedule, including the merger of AIB and EBS, the merger of Anglo Irish Bank and Irish Nationwide Building Society, and the plan to recapitalise Irish Life & Permanent.

The statement said changes had been made to the Memorandum of Understanding between the Government and the Troika, but that these were 'largely related to updates to take account of progress to date'.

'We just recently met the mid-year fiscal target set as part of the Programme with tax revenues increasing and public expenditure being managed within the limits set out for the year,' said Mr Howlin.

'Furthermore, the public service paybill is being managed and is on target.'

Both ministers concluded saying it was encouraging that the programme was on track, but said that they were aware further difficult choices would have to be made in the forthcoming Budget.

Mr Noonan said it was too early to say if the Budget would have to raise more than €3.6bn, saying it would depend on Ireland's progress in cutting its deficit to 8.6%.

Fianna Fáil leader Micheál Martin noted his party's role in agreeing the elements of the programme when it was in Government.

Mr Martin said: 'The Troika's assessment of Ireland's progress is a welcome confirmation that the framework set out last year will deliver fiscal and economic recovery.

'The main finding of the assessment is that all key elements of the programme agreed last year remain unchanged and that the December 2010 Budget has shown that Ireland is putting its budgetary house in order.'

Mr Doherty said: 'Meeting EU/IMF targets is no measure of economic recovery. Implementing a failed EU/IMF austerity programme is not an indicator of success.'

Ajai Chopra of the IMF, Istvan Sekely of the Commission and Klaus Masuch of the ECB have been reviewing progress on restructuring and deleveraging the banks.

They will also deliver new estimates on the peak debt GDP ratio and this year's Budget deficit.

The fourth review in September is likely to be a lot more challenging. 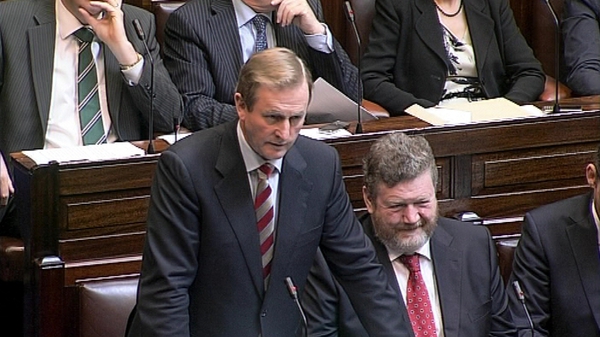 EU Council did not discuss Ireland in detail