Independent TD Mick Wallace has said he is very sorry for the offence caused to one of his Dáil colleagues after calling her 'Miss Piggy'.

Speaking on RTÉ’s John Murray Show, the Wexford TD said he was completely out of order in the comments he made about the Fine Gael TD for Dún Laoghaire Mary Mitchell O'Connor.

He said it was completely his fault and he said fellow Independent Deputies Shane Ross and Luke 'Ming' Flanagan had nothing to do with it.

Mr Wallace said that it was clearly in bad taste and that he had no right to be passing comment like that.

He said he rang Ms Mitchell O'Connor this morning and apologised.

Ms Mitchell O'Connor said the incident represents a type of casual sexism that is unacceptable.

The Dún Laoghaire TD said when Mr Wallace attempted to apologise to her in a phone call subsequently she cut him off.

She told reporters she had been upset but had now moved on.

Mr Ross has said he will apologise to Ms Mitchell O'Connor for anything he has done to offend her.

Deputy Ross, who was caught on microphone criticising her dress sense in the Dáil Chamber, said he had called Ms Mitchell O'Connor, but had not yet had a response.

Senator calls for TDs to be suspended

A Fianna Fáil Senator has said the TDs who made remarks about Ms Mitchell O'Connor should be suspended from the House.

Labour's Ivana Bacik said the remarks show that the culture of sexism is still prevalent in politics.

In the Seanad today, Senator Bacik said the comments were sexist and will not help increase female representation in the houses of the Oireachtas.

Independent Senator Rónán Mullen said it was embarrassing behaviour and added it raised bigger issues about how politicians conduct themselves. 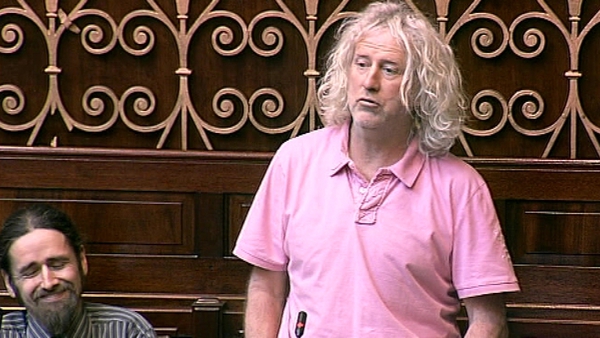