There are reports that European Union leaders may hold an emergency summit on Friday after finance ministers acknowledged for the first time that some form of Greek default may be needed to cut Athens' debts and stop contagion to Italy and Spain.

European stock markets fell today due to fears that the debt crisis will spread.

Despite the Government regarding agreement at last night's Eurogroup meeting as a breakthrough for Ireland's long-term debt situation, the wider eurozone is still gripped by fears of contagion spreading to Italy and Spain.

There are also open divisions over whether Greece will default on its debts.

There have been conflicting signals about whether eurozone leaders would gather in Brussels on Friday for an emergency summit.

However, the question of what kind of role private creditors will play in a second Greek bailout is proving as intractable as ever.

Essentially countries whose taxpayers will contribute the most want the private sector to be involved the most.

But such involvement will almost certainly mean a selective default of Greek debt.

Dutch Finance Minister Jan Kees de Jager has said that ministers had effectively crossed the rubicon on that issue, despite the trenchant resistance of the European Central Bank.

That claim was denied by Luxembourg, while the German finance minister said a decision on Greece could wait until September.

The entry of Italy to the list of countries which are suffering from an escalating cost of borrowing has sent tremors through the markets.

The fear is that the Italian economy is so large that it could prove very challenging for Europe to rescue.

It is that new concern that prompted eurozone finance ministers to scramble to Brussels yesterday.

Last night they agreed in principle to widen the measures to tackle the crisis, which could have positive benefits for Ireland.

It could mean a lower interest rate, longer debt maturities, and the possibility of a bond buyback programme, which could translate into a reduced debt burden.

Minister for Finance Michael Noonan has described the move, which could see Ireland's debt burden being reduced, as a significant advance that would improve our economic situation.

However, details of the measures remain sketchy and final measures are expected to be approved by eurozone finance ministers at the end of the month.

In such a torrid atmosphere, Italy's bondspreads rose to above 6% for the first time in 14 years before falling back.

Italian bank stocks also fell heavily throughout the day before rallying this evening. 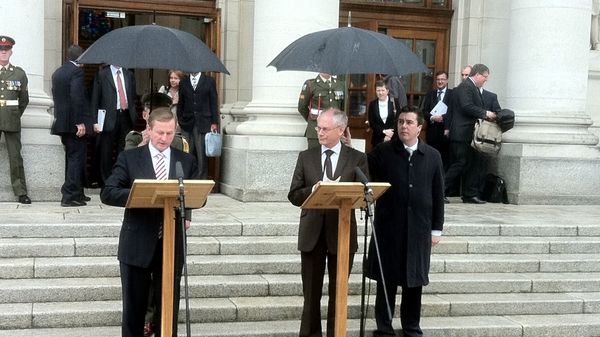