Tánaiste and Minister for Foreign Affairs Eamon Gilmore has said he is concerned about reports that a Gaza bound Irish ship may have been sabotaged.

The Irish Ship to Gaza campaign says €15,000 worth of damage has been caused to the MV Saoirse, which had been due to take part in a humanitarian mission to Gaza.

A chunk was found to be missing from the ship's propeller shaft and the activists say the damage could not have been done accidentally.

They say a Greek ship due to take part in the flotilla was also targeted in the same way.

Irish Ship to Gaza says it believes Israel is responsible for the damage.

The Israeli embassy in Dublin says it has no connection with the incident and no information on it.

Mr Gilmore said there would have to be an investigation by the Turkish authorities.

He said the Government would take a very serious view, if it turned out that the vessel had been sabotaged.

The Tánaiste said it was his view that those who intended travelling on the ship were well intended and well motivated.

Mr Gilmore's department had issued travel advice that it was dangerous to travel on the vessel and he said he met a delegation of those travelling a few weeks ago and subsequently met the Israeli ambassador.

The Israeli ambassador was told by Eamon Gilmore what the travel advice was, but also of the expectation was that there would not be a repeat of last year's attack on a flotilla bound for Gaza.

Mr Gilmore added that the people were engaged in what is a form of peaceful protest and expressed the hope that there would not be a disproportionate response.

The MV Saoirse will not be able to take part in the flotilla, but its Irish passengers are likely to be accommodated on other vessels.

United Left Alliance TD Richard Boyd Barrett earlier criticised both Taoiseach Enda Kenny and the Tánaiste for calling for safe passage for last year's flotilla while in opposition, but for failing to do so now they are in Government.

Around 60 people are protesting at the Spire on Dublin's O'Connell Street against what they say is a deliberate sabotage of the MV Saoirse. 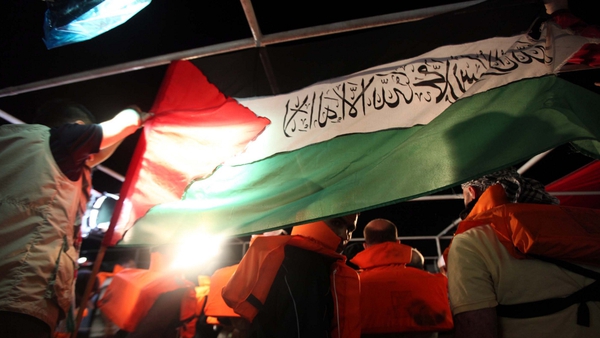