Greek Prime Minister George Papandreou called on all political parties to back an unpopular five-year austerity plan, which international lenders have made a condition for further aid to Greece.

‘Our vote is the only chance for the country to get back on its feet,’ Mr Papandreou told legislators at the beginning of a parliamentary debate on the law.

He said a vote in the favour of the law would end the uncertainty hanging over Greece.

The European Union and International Monetary Fund have made approval of the €28bn package of cuts a key condition for the next installment of funds Greece needs to avoid bankruptcy next month.

The Greek parliament is considering a new package of tax increases and spending cuts which, if passed, will guarantee renewed funding from the European Union and IMF.

However the main opposition party has said it will vote against the deal, despite appeals for national unity from EU leaders.

Mr Papandreou has a slim parliamentary majority and so it will be a significant test for him to get the deeply unpopular package through.

Following the debate a parliamentary ballot on the framework of the austerity package is expected to take place on Wednesday.

If the framework passes Greek lawmakers will then be asked to vote on a bill containing specific steps to implement the measures.

The country's defence minister has warned of catastrophe, bankruptcy and default if the austerity proposal is defeated, because EU leaders have decided to withhold the €28bn payment due next month under Greece's first bailout unless the reforms are passed.

EU leaders are also waiting for the new austerity measures to be ratified before they complete work on a second bailout package for the country.

It is hoped that any new package will see the voluntary involvement of private creditors.

French President Nicolas Sarkozy has confirmed that his government has reached agreement on the matter with French banks.

They have promised to reinvest or roll-over 70% of the Greek debt they hold into long-term 30-year bonds.

However, some have suggested more radical options to solve the Greek debt crisis.

Former Bundesbank chief Axel Weber told the Wall Street Journal that the way to finally resolve the problem is for the EU to guarantee all of Greece's outstanding debt. 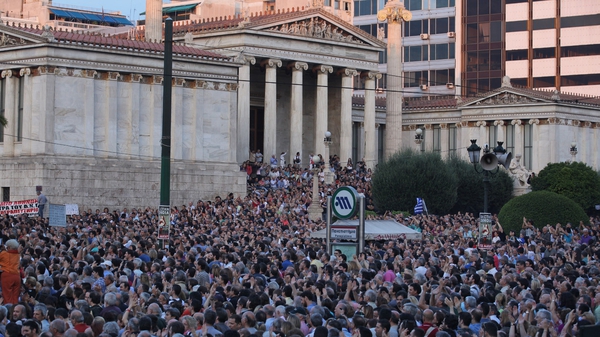