However, it said Greece had to adopt an austerity and privatisation programme as a matter of urgency in order to avail of a second bailout programme.

Greece needs a further €120bn in order to avoid going bankrupt over the next two years.

Greek prime minister George Papandreou lodged a formal request for a new bailout with the EU and the IMF, the EU leaders’ statement said.

‘Following the request by the Greek government announced by the Greek prime minister,’ the bloc ordered finance ministers ‘to complete work on outstanding elements to allow the necessary decisions to be taken by early July,’ leaders said of the call for a second financial rescue.

Mr Papandreou said on leaving the summit for the night: ‘We've got the support of our partners and I think this is not only a green light but also a positive sign for the future of Greece.’

In a separate development, the Taoiseach and president Sarkozy of France held a brief meeting on the margins of the summit.

A government spokesman said they had agreed that finance officials in Dublin and Paris should continue to work together on the interest rate issue until a satisfactory outcome was reached.

In a joint news conference the President of the Commission Jose Manuel Barroso and the President of the European Council Herman Van Rompuy said that the implementation of Ireland and Portugal's reform programmes should support their return to seek funding in the international markets.

In summit conclusions issued this evening there was no mention of Ireland's interest rate, but it is understood Mr Kenny also raised the issue over a working dinner.

According to a Government spokesman, Mr Kenny was to stress that Ireland had met its targets under the EU programme and could be regarded as a model or flagship country in emerging from a bailout crisis.

He said Mr Kenny would stress that it was therefore logical that Ireland receive an interest rate reduction.

Irish finance officials are continuing to work with their French counterparts on a text which would pave the way for a reduction.

RTÉ News understands that the focus has shifted away from increasing Ireland's corporate tax rate - as a quid pro quo for an interest rate cut - and moved instead on to the issue of a Common Corporate Tax base for the EU.

The so called CCCTB (Common Consolidated Corporate Tax Base) is a move to harmonise the tax base across Europe, in other words, to establish a formula whereby multi-nationals, with numerous subsidiaries across the EU, end up making one simplified tax return instead of up to 27.

A senior source told RTÉ: ‘No one really believes Ireland is going to raise its corporate tax rate.’

Officials are working on a text which will satisfy French concerns on the corporate tax issue but which, one source insists, does not require a corporate tax rate increase.

Earlier, Mr Kenny said that he did not believe the issue of Ireland’s corporate tax rate would be resolved at the summit.

Asked by journalists about this possibility, Mr Kenny said: ‘to be honest, I don't expect so.’

He said that he had raised the question of the rate this afternoon with the leaders who are also members of the centre right European People's Party.

Asked when a deal might be done, Mr Kenny said ‘I never set a deadline on this issue and will not now.’ 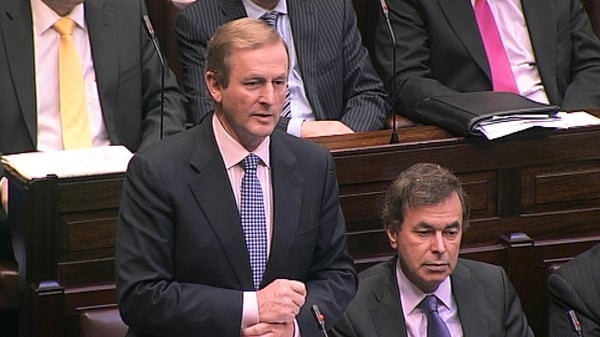 Taoiseach will meet Sarkozy in 'due course'