Minister for Finance Michael Noonan has said he believes the EU will agree a very credible financial plan for Greece, which would not have adverse effects on Ireland.

Arriving at the EU Finance Ministers' meeting in Luxembourg, Mr Noonan said he and his colleagues would 'commence the process towards a solution of the Greek problem and I would hope over the next few weeks or so, leading up to 11 July, that a full solution will be put in place which would be credible and long term.'

Asked if it would be really credible, Mr Noonan said: 'It has the possibility of being very credible, but the primary Irish interest is to ensure that whatever solution is put in place does not contain elements which would affect us adversely, so we'll certainly be saying no contagion for Ireland - regardless of what the conditions are.'

Asked to explain that statement, Mr Noonan replied: 'It'll depend on the measures that are put in place, but in very simple language, we don't want any knock-on effects from the Greek deal which would work against Ireland's interests, and I think so far that is not going to happen.'

On newspaper reports about European Central Bank anger at his comments on burning bondholders, Mr Noonan said: 'I never respond to unnamed sources. We've certainly had no direct contact at all which would suggest there was any veracity in that.'

Questioned if other EU Finance Ministers might be annoyed, he added: 'All their concentration will be on Greece. In my interview in the US, I made it very clear - the bond issue is something Ireland would be taking up with the ECB and the IMF and the Community in the autumn and that it was not a matter we would pursue immediately.'

Greek Prime Minister George Papandreou has urged political parties to forge a 'national accord' and back him in a confidence vote in order to overcome the economic crisis at a 'crucial' time.

'I have asked for a renewal of the confidence in the government because the country finds itself at a crucial point,' Mr Papandreou said at the opening of debate on a parliamentary vote of confidence in the new Greek cabinet.

Mr Papandreou revamped his government on Friday in the hope of securing the green light to forge ahead with further austerity measures, amid public protests.

The prime minister stressed that his priority was 'a national accord to tackle the Greek debt and deficit which are a national problem.'

He said he understood 'the sacrifices the country' is making and the street protests, adding that a referendum would be held in September to make progress on the large-scale reforms.

A controversial budget plan, including €28.4bn of fiscal belt-tightening, must be adopted by the end of the month in order to convince creditor nations, the EU and the IMF to continue dishing out financial aid to the country.

Mr Papandreou's socialist Pasok party holds 155 of the 300 seats in the Greek parliament.

He called for a confidence vote in order to calm the dissenters in his own party as well as to seek political consensus with the opposition on the right.

The centre-right has so far refused to back the next round of austerity measures.

The proposal, developed by his ministry, would see a beefed-up version of Europe's temporary bailout mechanism lending to Greek banks to insure they have adequate collateral with the ECB, the report said. 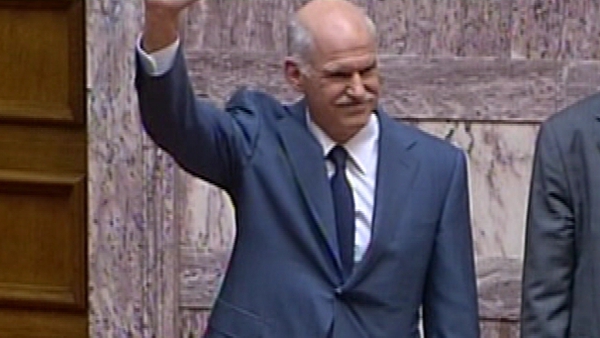