Syrian state television has reported that the army has taken complete control of the flashpoint town of Jisr al-Shughour.

More than 5,000 Syrian refugees have crossed the border and a UN refugee spokesman said the Red Crescent was preparing a fourth camp with room for 2,500 more. Witnesses said some 10,000 Syrians were sheltering near the border.

The assault on Jisr al-Shughour, on a key road junction, is the latest action by armed forces to crush demands for political freedom that pose an unprecedented challenge to President Bashar al-Assad's 11-year rule.

The main Syrian activist group organising protests said the crackdown had killed 1,300 civilians since February. Rights groups had previously put the toll at around 1,100.

Residents said most of Jisr al-Shughour's 50,000 people had fled toward the Turkish border about 20km away and tanks and helicopters had been shelling and machine-gunning the town.

Syria has banned most foreign correspondents, making it difficult to verify accounts of events.

The government said last week that ‘armed gangs’ had killed more than 120 security personnel in the town after large demonstrations there.

Refugees and rights groups said the dead were civilians killed by security forces or soldiers who had been shot for refusing to fire on civilians.

The United States accused the Syrian government of creating a ‘humanitarian crisis’ and urged it to halt its offensive and allow immediate access by the International Committee for the Red Cross to help refugees, detainees and the wounded.

Turkey has provided camps for refugees and sent the wounded to hospitals, but restricted access to the refugees, saying this is to protect their privacy.

The West and the United Nations have criticised Syria for not allowing international aid agencies into the country. 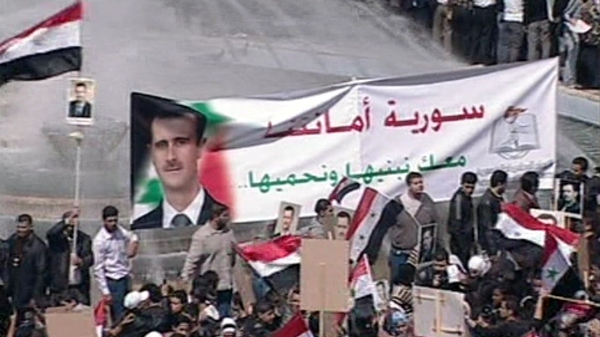